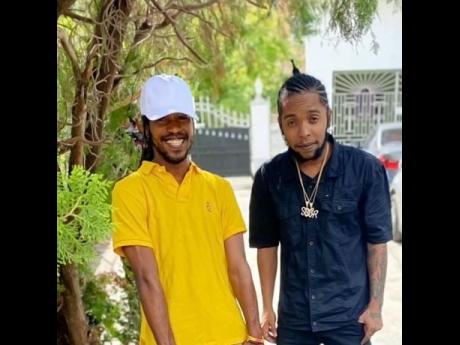 While he has not received that big breakthrough, Ulo Gyata is determined that his music will hit.

"Everybody have dem time. My time will come, jus' like how my bro time present itself," Ulo Gyata told THE STAR. The 'bro' he refers to is dancehall hitmaker Shane O, who currently has two singles trending on YouTube, Dark Lonely Road and Good Life.

"From the ninth grade, I leave my home in Papine and go live with Shane O in Red Hills until I graduate. My mother get me when she was 14 and she is a hustler, so she still supported me and nothing felt better than being able to provide for her with the fruits of my labour," said Ulo Gyata. Formerly known as Doh Play, the artiste admitted persons will wonder how come Shane O has had success and he hasn't.

"But they wouldn't see the push that he gives me. Everybody is different. For me, having a brother in the music like Shane O is a blessing. I use my vision and show what I can do and I see where he pushes that vision. If me get up tomorrow and share a new dream, me know him nah hesitate to help me make it a reality. And I truly grateful for that show of brotherhood," he said.

His single, Think Them Easy, released five years ago received major airplay. Then in 2017, Teflon Zincfence produced Real Yute, which became the first single of the compilation album Top Works Vol. 1, and showed his musical diversity. The recording artiste, who turned to Rastafarianism six years ago, said the music industry could benefit from more brotherhood, which he said "contributed to the success in one way or another".

"Our friendship is from before 'thunder roll and lightning flash' and it's still strong. He is one that consistently says 'I am proud of you'," he said. Ulo Gyata also names Chronixx and Masicka as "brothers in music". He has collaborated with Shane O within the past year on the single Zapp Zup, but is currently focused on promoting his latest single, Spliff And Guinness.

Shane O said that Ulo Gyata is one of the most loyal and ambitious persons in his circle.

"The qualities him possess very important in the industry. And, it's good when you have someone you can share ideas, and who can help with melodies and things like that... nobody better than no one in this," Shane O said.