No date with One1Can, Miss Kitty wants apology, or else 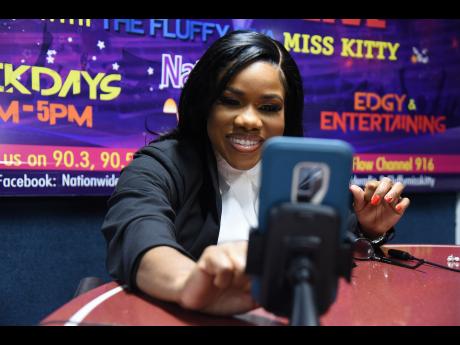 Aspiring artiste, Milton Wray, or One1Can, as he calls himself, stepped fiercely in the spotlight when he dashed out some not-so-complimentary comments to an online blog about multi-talented radio and TV personality, emcee, author, motivational speaker and attorney-at-law, Khadine 'Miss Kitty' Hylton.

Wray could now be facing a lawsuit, as a letter signed by law firm, Wilkinson Law, has given him an ultimatum — apologise and remove the damaging article or go to court.

"If the written apology and declaration are not received, and the defamatory article is not removed by 4:30 p.m. Friday, April 23, 2021 (Jamaica time), we will file proceedings in the Supreme Court on our client's behalf without further reference to you," the letter said.

The bone of contention appears to surround comments Wray made about a date he went on with Miss Kitty.

"There was never any such date between our client and yourself at Peppers or anywhere else as alleged," the letter from the firm stated.

It added that the "defamatory comments" give "impressions adverse to our client".

The law firm stated, "Apparently, this big and outrageous lie is to promote your fledgeling 'recording' (VIP Girl) and the video for it."

Recording artistes have been known to use various ways to get attention for themselves and their music, but entertainment-writer-turned-artiste, Wray, told THE WEEKEND STAR that he is popular already and doesn't need to go that route.

In the single VIP Girl, he shouts out several female celebs, most of them artistes, as well as Miss Kitty, the much-loved Fluffy Diva. Of her, he sings, "Ms Kitty pretty and she bright and witty, Fluffy cut size, now she right fi be with me."

When quizzed if the story was intended to help him 'buss', a confident Wray told THE WEEKEND STAR absolutely not.

"Mi buss already. I have been a star all my life. I do not need to resort to cheap publicity stunts. As for embarrassing her, she is certainly not someone who is bashful. She doles out punches every day and is very strident in her utterances. I am very strident as a person too. I speak the truth always."

He said that the last time he spoke to Miss Kitty was "before COVID, at Lime Cay".

When asked about the lawsuit he could be facing, Wray said he stands behind his utterances.

"I stand firmly, strongly and resolutely behind every word. I will not equivocate, and no amount of threats about lawsuit is going to censor me or frighten me," he said.

When THE WEEKEND STAR called Ian Wilkinson of Wilkinson Law to find out if he was the lawyer representing Miss Kitty, he did not deny it.