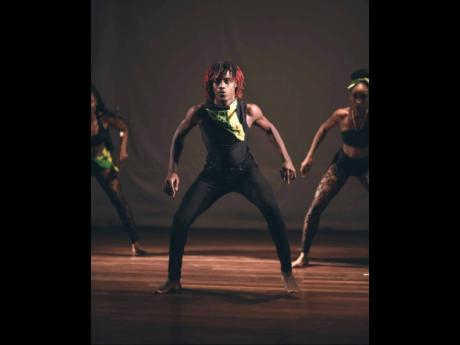 The KingstOOn Animation Festival kicked off its annual launch this year with an electrifying, animated performance from dancer and choreographer Shavaughn Byndloss.

Honoured by the invitation, set up through Marlon Simms, the director of School of Dance at the Edna Manley College of the Visual and Performing Arts (EMCVPA), Byndloss said he was grateful for the opportunity and that it was a long way from his humble beginnings in Trelawny.

"It was a fulfilling moment for me, because dancing in the pandemic solo, without many performances, has been rough. To get that opportunity from my background and where I am from, it's not the norm for us to get out and perform on stages like that. To represent Trelawny as a male dancer, it was beyond words," he told Dancers' Paradise.

When asked if he found dance or dancing found him, Byndloss declared that it was a bit of both. While attending the William Knibb Memorial High School, he would often mimic the girls during class, and the dance teacher, Ms Joan, spotted the talent and asked him to join.

While this new and exciting journey brought him great joy, it saddened him to receive the biggest fight from his family, who showed him no support. "My parents never saw a way for me to make money through dance, so they thought it was foolish. But I had to prove them wrong," he added.

With his eyes on the prize, he filled out his college application for EMCVPA, signed up for student loan and travelled to Kingston before dawn to audition, without his parents' knowledge.

Since then, he has been living the dream. "Leaving Trelawny with no modern contemporary dance technique or training whatsoever, I had to draw my socks up and be a versatile dancer. They say 'you want good, you nose affi run', so I was determined to have modern, folk and dancehall down pat," he revealed. Currently, he is in rehearsals for his final year show, and he was recently promoted to company member of L'Acadco: A United Caribbean Dance Force.

The spread of COVID-19 and resulting restrictions shook him to the core and shifted existence as he knew it. So these days, he is just happy to be back in the studio, doing what he loves. After graduating, he hopes to continue training with L'Acadco and one day branch out on the international scene, work on getting his name out there and creating a space for himself that will promote freedom in movement.

His advice to anyone wanting to pursue a dance dream is do it. "Anything you want, you will get it if you fight for it. If you're down, just get back and fight again," he said.