Baddoll gives back to her community 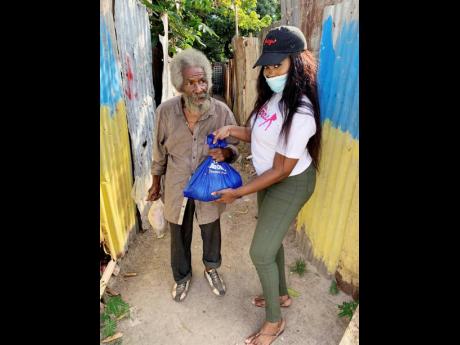 Baddoll says the elderly touch her in a special way.

Up-and-coming recording artiste Baddoll says that after making her debut last year, she has been making the effort to connect with the people more, and in a significant way.

"I selflessly serve the music. I am the bridge, the glue between the producer of the music and my listeners ... so, there's no better way than reaching them, than directly," she told THE STAR. "Giving back and doing different acts of kindness were always part of my upbringing, and I saw how it helped to impact the lives of those who received them."

Recalling the setbacks and economic burdens brought on last year due to the pandemic, Baddoll, given name Rochell Jacas, said they reminded her of challenging times as a young girl.

Baddoll shared, "I grew up seeing my parents, and family in general, always giving a helping hand to others, friends and strangers, no matter how small, and even when we did not have it ourselves."

So last week, the Come Around singjay visited Grants Pen, St Andrew, where she was raised. With her team, Touch Grung Music, Baddoll arranged and organised over 200 care packages which included whole chicken, rice, canned foods, and toiletries which were received with open arms by many of the elderly and single mothers in the area.

Her charitable deeds began while attending the St Andrew High School for Girls and the University of Technology, Jamaica, where she was heavily involved in clubs that would visit children's and old age homes often.

With the number of women now dominating the local entertainment scene, Baddoll is ready to not only make her mark within the dancehall arena with her distinctive sound and lyrical flair, but also to show she is human.

"As entertainers, and humans, we have to live not as individuals or for ourselves alone, but also for others. With more success, there will definitely be more community projects and partnerships with other organisations and my team," she said. "There are no limits on doing a good deed for those in need, hence the tag line, 'The smallest act of kindness is worth more than the grandest intention', that we used."