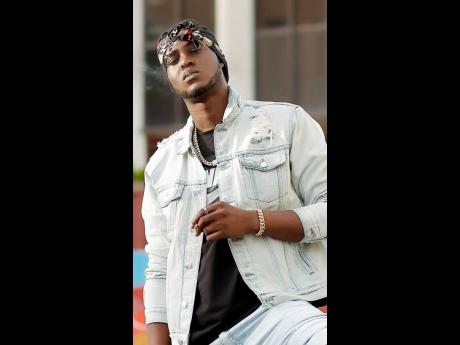 Fast-rising dancehall artiste Onsound Mynd believes that many of the problems Jamaica faces today, especially as it relates to crime, stems from a lack of love and care for young people.

In a new single titled Less Care, the entertainer paints a picture of the reality that young people face when they are not cared for the way they should be. He told THE WEEKEND STAR that personal experiences led him to write the track.

"Mi nah say nobody never really deh deh fi guide me innu because they did their best, and at the end of the day you make your own choices. But a nuff yute deh out deh need more care and more love," he said. "If a yute nuh wah learn, yuh can't force him, him ago do weh interest him. Some things happen inna di past weh mi nuh wah be too specific about but those things cause nuff a me fren dem fi pass off and baay supmn and it never affi guh so."

The entertainer said his main reason for doing Less Care is to show young people that choices have consequences, and even if their upbringing wasn't ideal, they can choose the positive route. The artiste said he chooses to focus primarily on positive music.

"To be honest, me can do every kinda music, derogatory and slack too, but me feel like now a di time fi try change dancehall because too much a one thing good fi nuttn," he shared. "Di thing dem weh some a di artiste dem a feed di yutes dem today, it nah go nuh weh, just a mek the things worse. So if me can hold on pan my ego and do supmn good, a dat me a do.

Producer of the track, Jr Bloodline, described Less Care as 'message music' and said it is delivering an inspiring message which is crucial in these times.

"We need people fi realise say love and care go a far way. When yuh listen the storyline, it a explain everything weh most ghetto yutes go chu and how having someone who warn yuh fi stay away from certain things can end up save yuh life," he said.

Onsound Mynd, who rose to prominence through his hit single Funny How, says he has several tracks capable of handing him equal or greater success.

"Mi definitely want to cross over to the international market and put mi music pan di world charts dem. A dat mi a aim for right now and so me a write those types of songs. We a put in the work like Sean Paul and dem man deh," he said.