Usain Bolt bats for structure and unity in dancehall 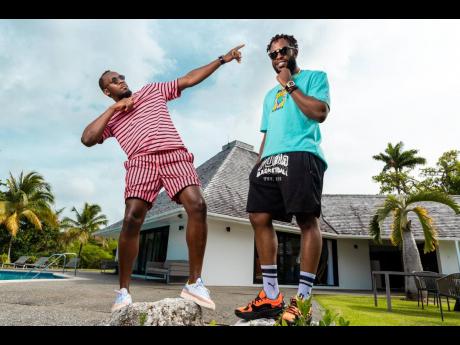 Having dominated track, Usain Bolt is aiming for world records in the music industry, and already the collaborative album, Country Yutes, has been kicking up dust - in a good way - across various music charts.

"As I said in the past, I'm just trying to get my foot through the music door while understanding this business," Bolt told THE STAR.

The 14-track compilation took charge of the number one spot on the iTunes Reggae Charts in place of the iconic 1984 Bob Marley and The Wailers Legend album and has been sitting at number six on the Billboard Reggae Charts for the past two weeks.

"We also got to number one on the Amazon Albums Chart also (so) we are just very humbled at the response. I am very happy to see the fans responding so positively to our hard work and continue to celebrate being on these charts especially it being our first project," he said.

Bolt and NJ, the retired sprinter's executive manager and business partner, both said that the way they have structured the work between them and the overall organisation has contributed to the album's early success.

In a post Bolt made last week, he expressed the need for unity in the music industry, highlighting the positive impact of reggae and dancehall and the representation it is getting locally and internationally.

"'Anything is possible, don't think limits', is my motto. We know we worked hard at creating a diverse body of work that would appeal to different people all over the world. You would have realised we tapped into afrobeat and the UK trap sound, along with a little reggaeton, while ensuring reggae-dancehall music was represented. That is definitely structure," Bolt said.

NJ, who is also featured songwriter and artiste for the album, shared the same sentiment and said the promotion of Country Yutes will be ongoing. They have travelled to Europe to ensure their brand is getting the exposure.

"We will continue to go into different markets to promote the album. We've been to Europe since the album's release and we are back home for a minute," he said, adding that "we just dropped the music video for the single Yuh Know which was filmed in London. We did that to present another look outside of always shooting here in Jamaica."

In Yuh Know, the lyrics ' opportunity meet preparation, nuff a dem a pree separation. That just show desperation, the whole ah dem a face expiration', reinforces the label's message to the industry.

"When Usain said he wanted to get involved in music, I asked for some time to study the craft. All the information we've gathered will help us a long way and when working with other artistes going forward. The recent Billboard and iTunes recognition is definitely added bonus in the journey so far," NJ said.