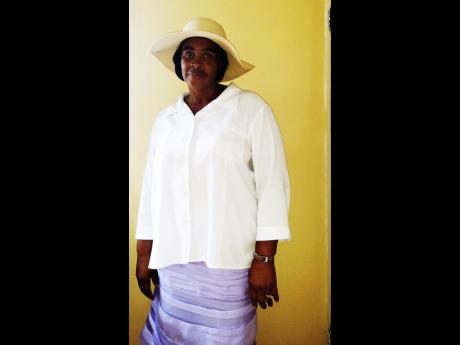 Idel Thompson was 12 years old when she surrendered her life to the Lord. Now a member of the Bloomwell Olive Tree Church in Clarendon, she testified that like many Christians have experienced, she, too, has seen many miracles in her life since she started her journey with God.

"The Lord has really done a lot for me. I have experienced God's anointing

and blessing over my life, but the most profound one which has really gripped me and encouraged me to stay with my God was two years ago when my son came home one day, and suddenly the atmosphere in the house changed," said Thompson.

She shared that she told her son that whatever he had in her house at the time that should not have been there, he should take it out. His response to her request was that he did not have anything. Thompson said she went to work the following day and she had a feeling that there was something that her son was not telling her.

"That feeling was still there, and I called him and told him that if he did not want to tell me what he had in his possession I was going to send the police for him," Thompson said.

The woman of God said she told her son that she was not going to send a Jamaican police for him, but that she was going to summon the angels Gabriel, Michael and Raphael to arrest him.

"He then said to me that I should hang up my phone and he would send me a picture. I hung up the phone and when he sent me the picture, it was a gun," testified Thompson

The mother said she asked him where he got the weapon, and told him that she did not grow any gunman in her house.

Thompson noted that her son had been attending her church and even played music there, yet no one knew he had a gun in his waist.

The God-fearing woman said her son told her that the weapon was given to him by a friend.

After that revelation, Thompson said she prayed and asked all the pastors and believers to pray for her.

Luckily, that same week her son returned the gun.

But that was just one of the many times God worked wonders in her life.

The church woman recalled being ill at one stage in her life, along with her son, who, according to her, doctors gave up on.

"Because of God's mercy, He brought us out. There are several instances in which God has seen me through. One morning I woke up and my 12-year-old son was unable to breathe. His body was as cold as ice. I was in my sleep that morning when a voice told me that I needed to pray because my son is dead," testified Thompson.

She shared that there was no life in him, and when she called him he did not respond. The mother noted that a double portion of anointing came upon her and she started to pray.