'Mother Williams' given a fond farewell 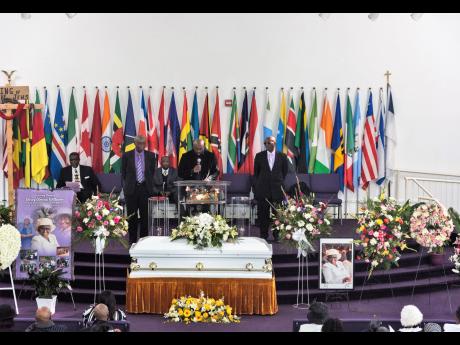 Contributed The casket of Darcy Williams in the church.

It was a packed Ebenezer Church of God at Hyattsville in Maryland,in the United States on Saturday, January 6, as scores of family members and friends of the late Darcy Elmina Williams turned out to pay their last respects to a real woman of God.

She was remembered as a warrior for Christ in the eulogy read by her grandson Amhara Williams.

She was described as a woman who never faltered whenever and wherever duty called her. It was said that Williams was always visiting homes to pray for the sick, the shut-ins, and those who simply needed Jesus Christ in their lives.

She was also described as a Christian who always gave of her best and would never allow anything to come between her and her God.

"She touched a multitude of lives in a positive way and will be greatly missed, just as how she was missed by her church family in Jamaica when she migrated to the USA in 1983," said her grandson.

Her children made it clear that she was the best mother in the whole world and that the many prayers sent up for her family members will take them through the years ahead until they meet her on the other side of river Jordan.

Her children shared that her radiant smile warmed the hearts of many, and her delicious meals and her kindness will always be remembered.

It is said that kindness was the middle name of Mrs Williams, because if she did not have what to give to those who were in need, she would always be worried.

'Mother Williams', who was the eighth of 16 children born to parents Joseph and Louise Sweeney, was born on February 28, 1929.

Her early education was acquired at the Mount Liberty Elementary School in Clarendon before she went on to do sewing.