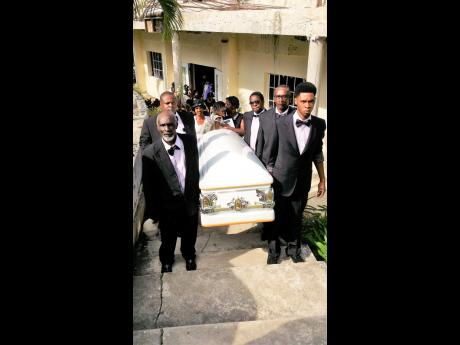 Pall-bearers carry the body of Nena Wilkinson from the church. 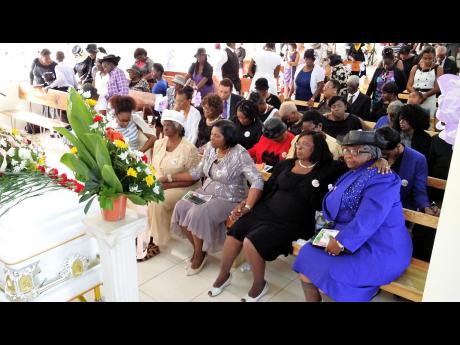 Mourners pay their last respect to Nena Wilkinson at the Sanguinetti New Testament Church of God.
1
2

It was an outpouring of love, respect, and glowing tributes for the late Nena 'Sister Lena' Wilkinson at a service to celebrate her life at the Sanguinetti New Testament Church of God last Saturday.

From as early as 11 a.m., mourners started filing in to get a last look at the body of the late Clarendon centenarian, who had touched hundreds of lives.

Wilkinson, who was born on October 15, 1917, passed away peacefully on January 7. She was remembered as a great mother, grandmother, and great-grandmother, and a classy icon.

Wilkinson's niece, Marie Wilkinson-Isaacs, told mourners that her aunt was a wonderful mother to many.

Wilkinson-Isaacs said that her love, kindness, and care for persons will live on for decades.

Orville Heslop, who had been acquainted with Sister Lena since he was a boy, shared that he was blessed by God to have lived for over a hundred years.

He said that she cultivated many good attitudes and values during her lifetime.

"Sister Lena was a woman of character. She lived at an age when she passed on virtues to children. She was a hard worker who was honest, kind, caring, and thoughtful. She was a woman who feared God," he said.

In her tribute, Pastor Carmen Dunkley shared that Wilkinson was quite involved in the lives of all children who attended the Sanguinetti All Age School (now Primary).

"She was not known as a businesswoman who would turn away children who had no money to purchase lunch from her. She gave them out of her love," said Dunkley.

For Winnifred Davis, clerk at the Sanguinetti New Testament Church of God where Wilkinson worshipped for over three decades, the deceased was a woman of a quiet disposition who was focused as she worshipped.

"She was a woman of faith. She was able to read her Bible at 100 years old without the use of glasses. She was a real special woman in the church and the community," bragged Davis.

Wilkinson's niece, Sharon Reid, in doing the eulogy, said that her aunt taught life lessons and skills. She noted that she was a generous businesswoman who was dutiful as a wife.

Like Davis, Reid described her aunt as a staunch churchwoman. She said that she loved Psalm 23, and could be overheard repeating it on many occasions.

"My aunt was an amazing woman. She was the first of six children born to Gertrude Hylton and Hubert Gabbidon at John's Hall in Clarendon. She was married to the late Narval Wilkinson, who predeceased her in 1993," said Reid.