STAR of the Month: Shauna Controlla doesn’t regret leaving the US 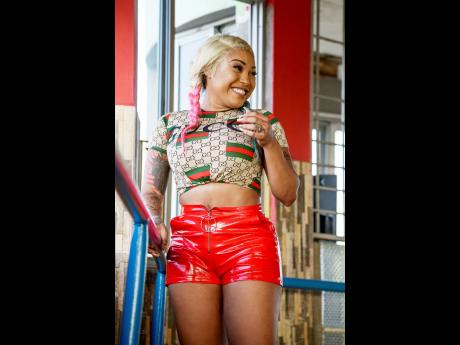 Before she was Shauna Controlla, she was just Laniece Shauna Anderson – a young girl who just wanted to help her friends.

Helping out is how her career in the public eye began as the ‘better half’ in dancehall artiste Gully Bop’s career. As that relationship cemented her in the dancehall arena, another one caused her to leave a potential future in the United States behind after moving there with family years before.

Shauna claims that she chose to leave after getting into some trouble stirred by friends.

“I always care for people more than myself. Mi always want fi see people elevate, and I always try to help people. So I put myself on the line for them,” she said.

While she did not go into details about the incident, court documents obtained from the Harris County District in Houston, Texas, said that Shauna, was slapped with two charges in the US – one in 2011 (charged with possession of marijuana, between five and 50 pounds) and the other in 2013. She made a deal with the court, which saw her pleading guilty to the charges in exchange for two years’ probation. The record showed that the probation period ended earlier than planned, and Shauna was freed.

Despite having a criminal record, Shauna expresses no regrets at the circumstances.

“Mi go through what me go through and move on. If mi dwell pon it and stress out miself, me a go suffer enuh. Nobody else nah go suffer. I wouldn’t change nutten. Mi glad the way it happen, and that’s why mi stay firm and continue. Mi go through all a weh me go through for a cause, not an applause,” she said.

Now, she has no real interest in going back stateside, unless it’s a gig for her budding music career.

“Mi never want to go back to America just to work nine-to-five. I was there working nine-to-five, but I’d rather have a work permit. That’s what I’m doing here. I just want to be patient. Hey! Life nice a Jamaica, enuh. Unuh have it dung yah. Gwaan think foreign is a bed of roses,” Shauna said.