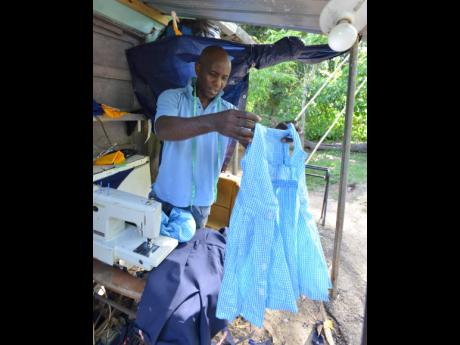 Bailey shows off one of his creations. 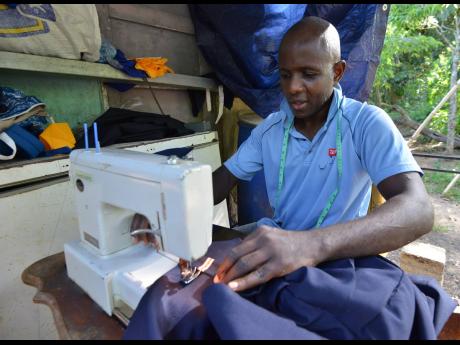 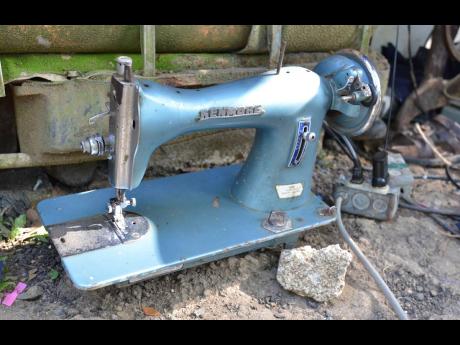 For the past 20 years, Clovis Bailey has enjoyed being a tailor. It is not an easy job, especially during the back-to-school season, but Bailey said that he has everything under control.

The 42-year-old said he has other jobs and is known as a ‘jack of all trades,’ in the rural community of Stapleton in St Catherine.

Among the many hats that he wears, he said that he is able to balance them all and finish his tailoring just in time for the new school year.

“From me leave school mi a sew, enuh. Me get used to it and know the uniforms that I am going to get. I do tiling, plumbing, sometimes me do upholstery. I also paint and when school in session, I am the one who carry the children in and around the community to school on my bike,” he said.

As people prepare for the new school year, Bailey said that he goes to bed in the wee hours because he wants to ensure that everything is ready for the children before their first day of school.

“As simple as you see things here, sometimes I am here until one inna the morning a sew. Most of what I have to do, done already, and what is left a go done by Sunday. The uniforms for the high school students tek like an hour to make and the basic school ones take like half an hour,” he said.

Bailey told THE STAR that knowing what he is making and perfecting his skill set for the past 20 years has made his job of making school uniforms easier.

This year, he said he had to refuse some work because he was doing other jobs. He said though that in the last two weeks, he relieved himself of former duties and made himself a slave to the sewing machine.

“The only people who may suffer from my work are my children. Fi dem uniform mek Sunday night and school open Monday morning. When my wife son did a go school, him inna the bathroom a bathe and mi deh out here a sew his uniform. From last week, me a sew non-stop so when me go in at one in the morning, me wake up back at seven and start again,” he said.

Bailey even made plans for the future in the event that there is no electricity.

He said: “Mi use dah machine deh when light gone so mi just pedal it and mek it work ‘til light come back. So mi always a work fi the children dem get them clothes,” he said.