More babies could die ... Ferguson says no guarantee there won't be more deaths 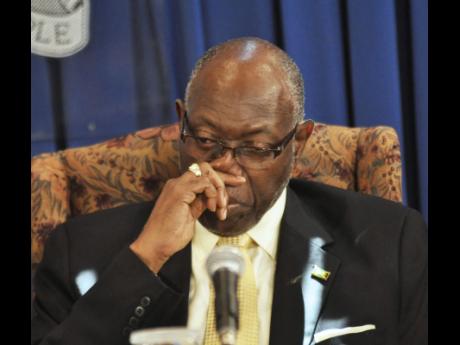 File Health Minister Fenton Ferguson is under fire for his handling of the recent klebsiella and serratia outbreak and other crises in the health sector.

Some 19 babies have died at two major facilities. a third hospital has been affected by the outbreak which began in June.

"We are doing everything locally, and with our international support, to curtail what is taking place with the infection at both institutions, even as we are looking at other hospitals," Ferguson said in parliament on Tuesday.

The Cornwall Regional Hospital (CRH) and University Hospital of the West Indies (UHWI) accounted for the 19 deaths. Ferguson said two cases of infants infected with one of the killer bacteria, Serratia, have been found at the St Ann's Bay Hospital.

"I cannot tell you that, based on what has happened, and what happened, even recently,even with the best of will, as Minister, I couldn't tell you that there will be no other," Ferguson said.

Ferguson said that since learning of the outbreak on October 16, he has made requests and received support from the Pan American Health Organisation, which has sent three additional experts to help fight the germ.

"If there weren't careful actions taking place with these special care nurseries, babies would be dying daily in much larger numbers," Ferguson said.

Two of the members of Parliament, who posed questions to Ferguson, said the death of the premature babies evoked personal feelings.

Dr Horace Chang, MP for North West St James, said he has a daughter who weighed 2.5 pounds at birth.

Central St Catherine, MP Olivia 'Babsy' Grange, too, said she had a daughter who was born premature.

"I am the mother of a pre-mature child and I thinking that if that child was born now, in July, in August, that child would have been a dead child," Grange said.

Meanwhile, the minister is coming under intense pressure especially in light of a comment he made in parliament that premature babies are "not babies in the real sense."

Ferguson said that there have been 620 admissions of babies to special care units and that 19 have died after contracting Klebsiella and Serratia at the Cornwall Regional Hospital and UHWI.

Ferguson said the babies were less than seven months premature, less than two pounds, and in many cases, very ill.

The minister said 45 cases of baby developing sepsis occurred during the period, leading to the 19 deaths. He said some of the babies had other issues because when a baby is born under two pounds and under seven months, their organ systems are not well developed and their immune systems are significantly compromised.