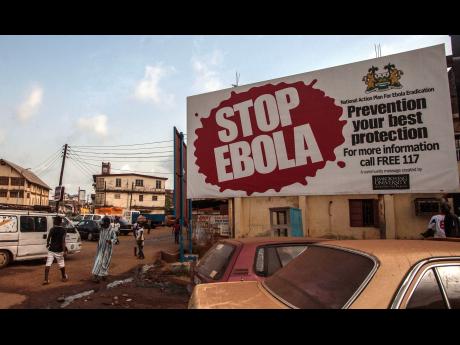 FREETOWN, Sierra Leone (AP) — Samples taken from the body of a woman who died this week in Sierra Leone tested positive for Ebola, officials said Friday, the day after the Ebola epidemic was declared over.

The World Health Organization, which on Thursday declared an end to the deadliest Ebola outbreak ever, said the new case emerged during a 90-day period of heightened surveillance, and that Sierra Leone's government acted rapidly. Authorities are initiating control measures to prevent further transmission, it said.

The infected 22-year-old woman came from the Northern Kambia District and went to the Northern Tonkolili District for medical care, Francis Langoba Kellie, spokesman for the Office of National Security, said on the radio.

Authorities are tracing her contacts and have dispatched teams to the area to investigate where and how she might have contracted the deadly virus, and if she might have infected others. Certain areas will be quarantined, he said.

WHO declared the Ebola outbreak over after no new cases emerged in Liberia. It had been at least two weeks since Ebola had been seen in Guinea or Sierra Leone. The three countries were most affected by the epidemic that began two years ago.

"Our level of preparedness and response capabilities are very high and there is no cause for concern," said Kellie. "We encourage the public to continue to practice the hygiene regulations which were in force during the period while Ebola was raging and the emergency regulations are still in force."

WHO spokesman Tarik Jasarevic said: "This really reflects what we have been saying yesterday ... that there is a risk, and this outbreak is in a critical phase right now where we are moving from case management to management of risk."

Sierra Leone was first declared Ebola-free on Nov. 7, after nearly 4,000 people had died from the virus there.

WHO declares Ebola transmission over when a country goes through two incubation periods — 21 days each — without a new case emerging. Countries are then placed on a 90-day heightened surveillance.

Ebola is spread through direct contact with the bodily fluids of people who are sick or bodies of the dead.

WHO says that flare-up cases, such as in Liberia, "are likely the result of the virus persisting in survivors even after recovery." Of particular concern is the fact it is now known that Ebola is present in the semen of some male survivors up to a year later. The WHO said Thursday that Ebola can "in rare instances be transmitted to intimate partners."