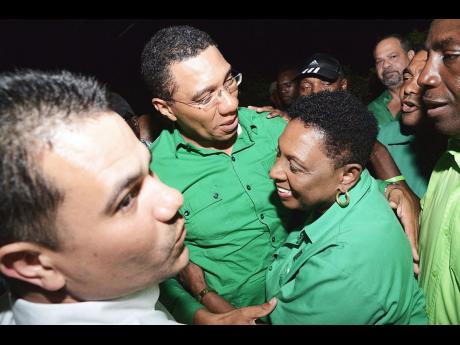 In a close race that was declared a few minutes before 10 p.m., the Jamaica Labour Party (JLP) defeated the People's National Party with three seat majority, 33 to 30 to win the 2016 general election.

The Andrew Holness-lead party which surged ahead after winning several marginal seats previously held by the PNP.

Holness was greeted with the Alkaline hit Champion Boy, and like a true champion, declared that his party's campaign strategies as the main reason for victory.

"This Government will not be Government as usual... our campaign was issues based, we focused on the things you said were important to you," he said amid numerous cheers.

Olypmpic silver medalist, Juliet Cuthbert-Flynn, was at the top of the podium after trouncing the now former Member of Parliament, Paul Buchanan by over 2000 votes to win the St Andrew West Rural constituency.

The JLP's whose campaign slogan was 'Poverty to Prosperity', made several promises on the campaign trail, including increasing the income tax threshold to $1.5M and creating 250,000 jobs.