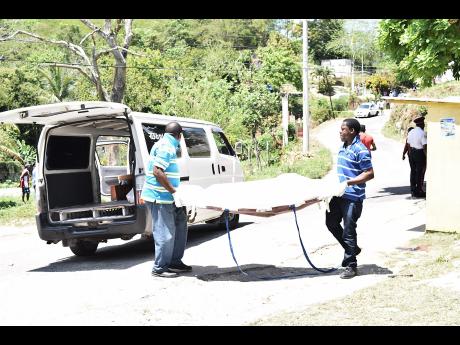 Morgue attendants remove the body of Victor Kerr from the scene where he was shot and killed in Roehampton, St James, on Frida, March 25.

Good Friday was a bad day for St James as four persons were murdered in the western parish and a fifth hospitalised in serious condition.

Two persons of Stone Mills, Anchovy, were killed by gunmen early in the day, and before night fell, two persons were killed in Blue Hole, Montpelier.

Montego Bay's mayor, Glendon Harris, said it is time for a zero-tolerance approach to crime in the parish.

Up to press time last night, the St James police say there are no motives yet in their investigation surrounding the murder of the two men and injury of another at Stone Mills.

The deceased men have since been identified as 49-year-old vendor Victor Kerr of Bueno Vesto, and 27-year-old Keno Thompson of an Anchovy address.

Reports from the Corporate Communications Unit (CCU) are that about 7:30 a.m. Kerr was at his stall with Thompson in proximity, when armed men drove up and opened fire hitting Thompson.

The men later returnd and shot Kerr, who witnessed the earlier shooting. A third person, who is currently hospitalised, was also shot and injured during the attack.

THE STAR gathered that Kerr had been operating his small stall for five years and was loved by many in the Roehampton community.

"He was a very jovial and friendly person, he don't trouble no one, he shouldn't have died in that manner, Oh my, I felt it so much", she said.

In Blue Hole, Montpelier, gunmen shot taxi operator Douglas Tingling, 41, and his common-law wife, Rose Marie Green, as they were returning to their house. No motive has been established for that attack.

Valentine Bailey, the councillor/caretaker for Montpelier, said the victims of the Blue Hole incident are not well-known to the residents.

"They recently moved here and built a house. They are new to the community," he said.

Meanwhile, Harris said that he will be seeking the support of the police to ensure that persons are prosecuted for the smallest of crimes as one strategy to break the back of lawlessness in St James.

"A boy must know that if he does not reach home from school within a certain time there will be consequences," said Harris.

He said too that many of the victims of crime in St James are involved in "nefarious activities".

"The people who are living decent, straight life, they are not the target," the mayor said.