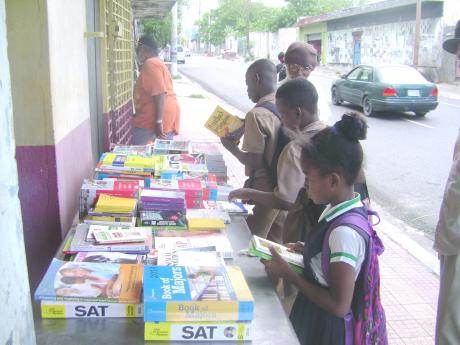 Contributed Students gather at the corner of Orange and Charles streets in downtown, Kingston, to collect books being distributed by Sounds and Record Foundation. 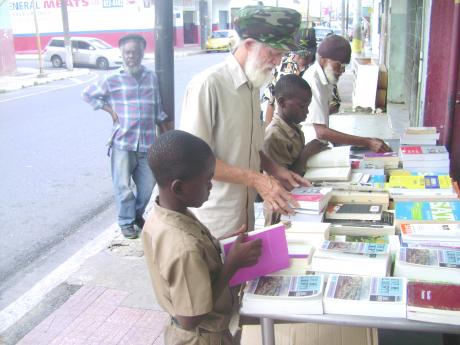 Contributed Roy Black, director of Sounds and Record Foundation, is engaged in the distribution of books to children.
1
2

Sounds and Pressure Foundation in Kingston is looking to start an after-school and summer-school programme to serve communities in the western section of downtown Kingston.

The foundation was established with the intention of catering to 60 persons. It was formed in 2006 as a partnership, and was registered as a foundation in 2014 with an objective to elevate the value of downtown Kingston as a cultural tourist attraction.

Julian 'Jingles' Reynolds, CEO of the foundation, said special emphasis is being placed on assisting children and young adults to prepare them for employment through increase in knowledge. He said that the focus of the foundation will be to exposing persons to tutelage in mathematics, English, information technology, and animation.

"We have recognised the high unemployment rate among young people of west Kingston. Young people need to be better prepared for the working world, and seeing that business process outsourcing (BPO) is the largest-growing sector in the working world, we must prepare them for it," Reynolds told THE STAR.

Reynolds added that animation will cater to the creative juices of the youth in the community, adding that the head animator at Disney, Florida, being a lover of the Jamaican culture, has offered to give a helping hand.

"We are getting these youngsters ready to be absorbed by the possibility of employment," Reynolds reinforced.

The foundation has partnered with The Mico University College, which will see senior lectures Dr Sandra Bloomfield and Dr Lorna Matthews managing the educational component of the initiative.

Reynolds told THE STAR that the Ministry of Education has pledged support. He also said that an organisation in Miami, Florida, has donated 32 desks and over 200 books.

"We are well on our way. We have many persons on board ready and willing to assist us," Reynolds told THE STAR.

The foundation had initially identified 127 Orange Street as the space to host the programme, but the CEO has named 153 Princess Street as the new location, due to want of a larger space.

Reynolds said the programme is open to any child or young adult living in west Kingston.