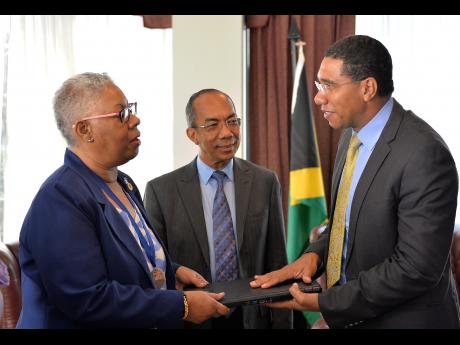 Contributed Prime Minister Andrew Holness (right) presents a laptop computer to Nurses Association of Jamaica (NAJ) president, Janet Coore-Farr, during a ceremony at the Office of the Prime Minister on September 5. Sharing the moment is Minister without Portfolio in the Ministry of Economic Growth and Job Creation, Dr Horace Chang.

The administrative functions of the Nurses Association of Jamaica (NAJ) have been bolstered through the presentation of computers by Prime Minister Andrew Holness.

The two laptops and four desktop computers were accepted by NAJ President, Janet Coore-Farr, and members of the association, during a brief ceremony held at the Office of the Prime Minister yesterday afternoon.

Holness noted that the donation of the computers was the fulfilment of a commitment made to the nurses during a visit to his office recently.

“During that meeting they expressed concerns about the shortage of equipment generally, and they specifically mentioned that they didn’t have computers to help them with their work,” he said.

Holness said the equipment will help the nurses with appropriate record-keeping and report preparation. They will also facilitate training programmes.

In another two weeks, Holness will present an infusion pump and blood pressure machine to the nurses.

Coore-Farr expressed gratitude to the prime minister, noting that the NAJ is appreciative of the computers.