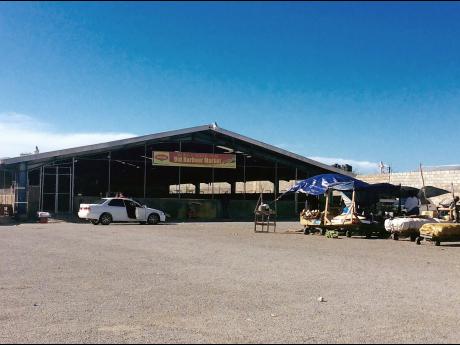 Ruddy Mathison Vendors set up shop outside the food market in Old Harbour. The area was paved by the parish council after dry good vendors who formally occupied that area were displaced by a recent fire.

Work to renovate the Old Harbour Market in St Catherine - a section of which was destroyed by a recent fire - is at a standstill.

Chairman of the St Catherine Parish Council and mayor of Spanish Town, Norman Scott, told THE STAR there is no money to complete the work that started three months ago.

"We have not received any funds from the Ministry of Local Government to complete the work despite Local Government Minister Desmond McKenzie's promise on a tour of the market after the recent fire to assist the council with funds to do the upgrading," Scott said. He doubted the market will be finished for the holiday season. Scott revealed that all the work done so far was paid for by the parish council.

"When he (Mckenzie) toured, (he) told us bluntly that he could not help us with compensation for our goods but he would assist with the renovations and repairs. So he should follow up on his words," said Pauline Daniels, who has been selling at the market for 30 years. Bunny Brown, who shops there frequently, said the people of Old Harbour deserve better.

"The bathrooms are in bad condition. Only a section of the main market area was renovated. Vendors now have to be displaying their produce on the ground because the stalls are incomplete," Brown said.