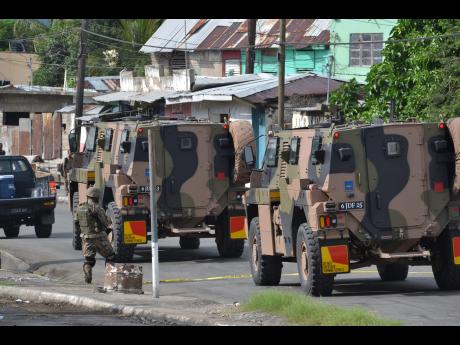 These armoured fighting vehicle were seen in downtown Kingston following the shootings on Friday.

Despite heavy police presence in the area, six persons were shot in the western end of Kingston - two fatally - yesterday.

The Jamaica Constabulary Force (JCF) has inundated the area with police personnel since last Friday to quell a raging war between gangs in Denham Town and Tivoli Gardens.

According to police reports, around 8:20 a.m. yesterday morning, 17-year-old Ezekiel Combs was among a group of persons talking, when unknown assailants opened fire, killing him on Pink Lane.

About two hours later, in a separate incident, 30-year-old Everald Freeman was among five persons shot on Bread Lane, Kingston 14.

Freeman, along with the four others, was rushed to Kingston Public Hospital where he was pronounced dead. One of the injured females was treated and released. The others remain in hospital.

Last Friday, the son of convicted drugs Kingpin and former strong man of West Kingston, Christopher 'Dudus' Coke, was shot as a group of Jamaica Labour Party (JLP) supporters gathered in front of a plaza in on Nomination Day.

Commissioner of Police, Dr Carl Williams, told THE STAR that with the help of members of the community, the police will be able to bring ease to the situation.

"We are optimistic that with help from everyone, the Government, the opposition, the people in the community, we will get this problem under control," Williams said.

According to Williams, the current problem stems from the fact that criminals are fighting for turf after Tivoli strong man Christoper 'Dudus' Coke was extradited in 2010 to answer to drug trafficking charges. He later pleaded guilty and is now serving 23 years in US federal prison.