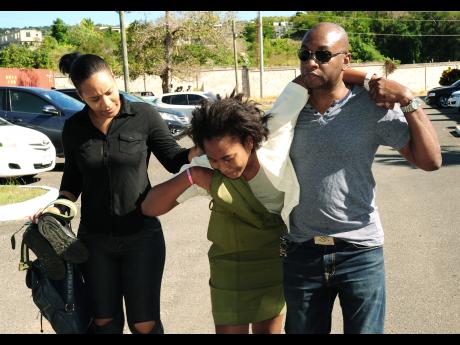 This student broke down and had to be rushed to hospital by her parents after suffering chest pain upon hearing about the gruesome death of her friend Shineka Gray. 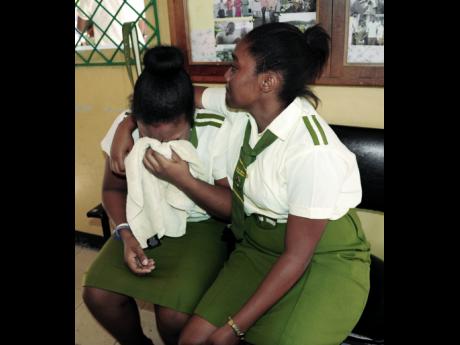 These two students at Green Pond High School in Montego Bay, St. James, comforted each other as news broke that the body of their missing schoolmate, 15-year-old Shineka Gray, who was found in bushes on Wednesday. 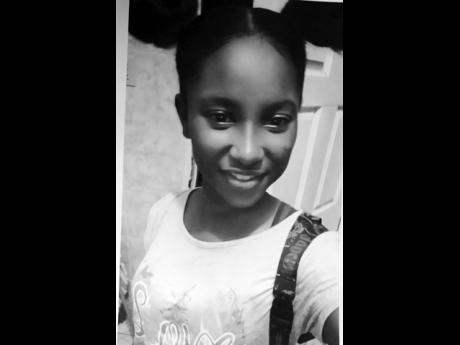 Shrouded in grief, the Green Pond High School yesterday was the scene of unimaginable despair and anger as news spread that 15-year-old Shineka Gray, a 10th grade student who had gone missing since Sunday, was found dead Wednesday afternoon in bushes.

The body had multiple stab wounds to the chest. Gray was last seen after attending the funeral of a former Green Pond High student in Lottery, St James, earlier on Sunday.

When she failed to return to her mother's house in the Bogue Village community of Montego Bay that evening, an alarm was raised and a report made to the police.

Her body was found in bushes in the Irwin area of the parish.

It is not clear if she was sexually assaulted before being killed, although relatives who went to identify the body said she had been assaulted.

At least five students fainted as grief-stricken schoolmates tried to deal with the situation.

Principal Michael Ellis told THE WEEKEND STAR that the students were taken to hospital for observation and medical assistance.

"We are taking it in stride. This comes as a complete shock to us here at Green Pond. Shineka was a quiet and pleasant student," Ellis said.

He said that students are receiving grief counselling from the relevant agencies such as the Child Development Agency and the school's guidance counsellor.

Gray reportedly returned to MoBay some time in the afternoon on the school's bus after the funeral.

She was among several students who went to purchase fast food.

TAKEN TO THE TAXI STAND

According to the mother of a friend, she decided to return to Bogue and was taken to the popular taxi stand along St James Street.

Her disappearance sparked a frantic search by relatives and neighbours from Mt Salem, where she shared a house with her father, stepmother, and other relatives.

"If she did only listen to me, then maybe this wouldn't happen," said her grief-stricken grandmother, Rose Slowly, who said that she last spoke with her on Sunday morning, trying to discourage her from attending the funeral.

"Shineka was a lovely girl. Very quiet and mannerable. I don't know how this family will go on without her. She was like my own daughter," she said as tears welled.

Her aunt, Nickeda Gray, could not hold back her sorrow.

"We are devastated; it has brought us down. We shared the same July 25 birthday. We shared cake. Why her? Why Shineka,and for what purpose? Words cannot describe what we feeling as a family right now," she said.

He said Shineka was such a beautiful soul that it was unimaginable that anyone would have sought to hurt her in any way.

"Since Monday, we received news she was missing. Several students have not gone to class. This is one of the cruelest acts that I have come across," he said.