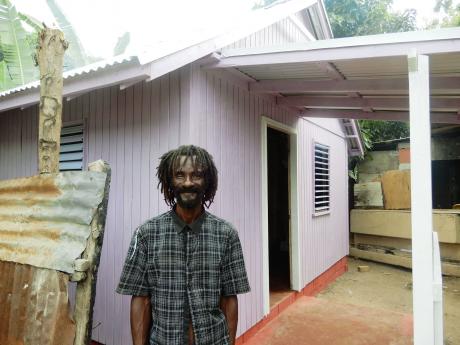 Fitzroy Mannings is all smiles in front of his new home. 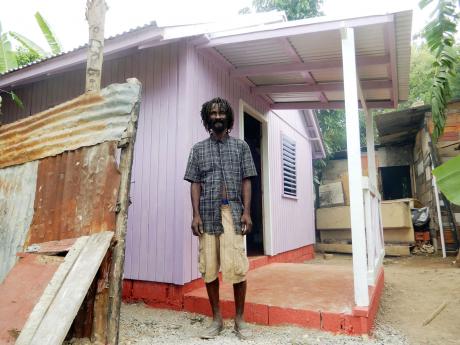 Fitzroy Mannings is a happy man after getting new home.
1
2

Though he is a man of little means, Fitzroy Mannings has always been one to help people. Some five years ago, when a woman's house was burnt down, he offered her and her daughter accommodation in his humble home, not knowing that he would experience the same fate soon.

"It was a Sunday. I was away from the house and I hear one of my friends call me and say me house a burn down. Mi laugh and say a joke. When I come and look, everything just burn and cave in. I leave back with only one suit a clothes," the Clifton district, St Catherine, resident shared.

He theorised that the woman might have lit a mosquito destroyer in the house, and it overturned, setting the place ablaze, and sending Mannings back to square one.

Since the incident, the 54-year-old Mannings has been living with his ailing mother and eight other family members in a dilapidated structure.

"I find it very hard, enuh. Sometimes we don't even have food, but it's through the help of the Most High, and some people who I stick by that I am able to survive," Mannings said.

He said occasionally he gets work cutting grass to feed horses on a nearby farm, and other times he does any other jobs that come his way. However, he was unable to finance another house with his meagre income.

After learning of his plight, Food for the Poor and Red Stripe partnered to build a two-bedroom house for Mannings yesterday.

His was the first of 10 houses to be built through the Red Stripe-Food for the Poor partnership. Red Stripe said the beneficiaries live in farming communities that participate in Project Grow, a cassava farming project that will increase the amount of local starch used in the production of Red Stripe's brewed products.

When our news team visited the area yesterday, Mannings was just sweeping out his new abode.

"Me feeling so very fine because once it wasn't like this. It was uncomfortable. I'm so very glad within myself. I give great thanks Food For the Poor and Red Stripe. Respect and honour every time," he said.

Despite the terrible tragedy that befell him when he reached out to assist another, Mannings said he would do it again.

"Me haffi help people because it's like the Father make me that way," he said.

Mannings said his house still needs a few items, such as a bed, stove and refrigerator, to make it more homely. Those wishing to assist may contact him at 473-0688.