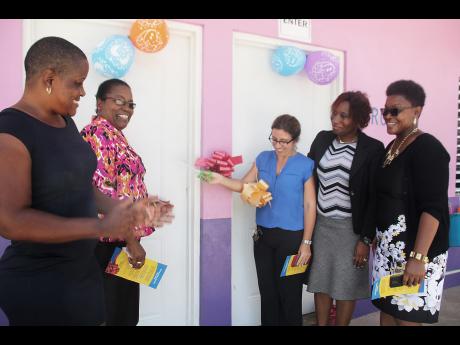 The ribbon cutting to the new Infant Department at Rio Bueno Primary. From left: Terry-Ann Ewan, past student, Maxine Headlam, regional director of the the Ministry of Education, Marianne Greaves of Tankweld Limited, Nadine Miller the Parent Teachers Association president, and Audrey Barrett, the principal.

The Rio Bueno Primary School in Trelawny is now the recipient of a new infant department, thanks to the Tankweld Group, whose officials were present for last Thursday's grand opening of the J$4-million facility.

Marianne Greaves, of Tankweld, in whose honour the building is named, said her company was motivated to make the contribute as a part of their corporate responsibility to give back to the community in which they operate.

"A lot of the kids from this school have their parents, brothers and sisters working for us, so when we were approached there was no hesitation," said Greaves.

Maxine Headlam, a regional director of the ministry of education, said the school has come a far way from her days as a student.

"I am a past student of this school and I remember in my days as a student, we were housed in an old wooden building, which seemed that any moment it was going to collapse," recalled Headlam.

"We go back very far in history. The records show that in 1834 money was granted to the Anglican Church to conduct repairs to the school. Today we are opening a new building which is a contribution," he said.

"The Ministry of Education cannot afford to do all is necessary, so we must give thanks and show an attitude of gratitude when Tankweld can contribute in this fashion."

Audrey Barrett, who has been serving as principal at Rio Bueno since 2013, expressed much joy and gratitude for Tankweld's contribution.

"I came here in 2013 and the population was 58 students and the Ministry of Education was discussing a closure of the school," said Barrett.

"Today we have 175 students and I can guarantee that come September with these two new classrooms there will be growth. It will be a big boost to our growth and will go a far way in determining the quality of the experience the infants, aged between four and five years old will get."