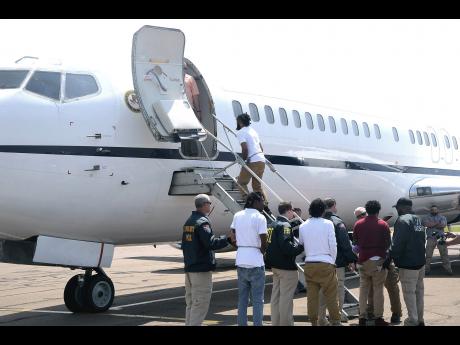 Alleged Jamaican lottery scammers being extradited embarks a plane to the United States at the Norman Manley International Airport in April.

At 26 years of age, former lottery scammer Mark James* has witnessed first hand the inherent risks that come with involvement in the illicit activity, including hatred from fellow scammers and others in society being a constant target of bad cops.

James, who first started participating in the scheme when he was 17, told the WESTERN STAR that "For the first year, I was like a broke man reborn."

"The hype life, the vehicles, and the music take you away from your true and real self. But nobody in society will love and respect a scammer. They will laugh with you, drink with you and want money from you, but they will look at you and see a criminal," James said.

While he told his story calmly, James was not prepared to be photographed. He pointed out that the players in the trade from which he broke away in 2012 should not be taken lightly.

"People will bad mind you and try to kill you, and the feud in the street over money is not nice because you have people who will kill you over money," he said.

The police said lottery scamming is chiefly responsible for the runaway murder toll in western Jamaica. James, who claims that he is no longer involved, told the WESTERN STAR that he has been the target of corrupt police officers who wanted a share of his money.

"You have to be afraid because a policeman will come and say 'James, you know I'm going to want a thing,' and if James doesn't react to that, it comes down hard."