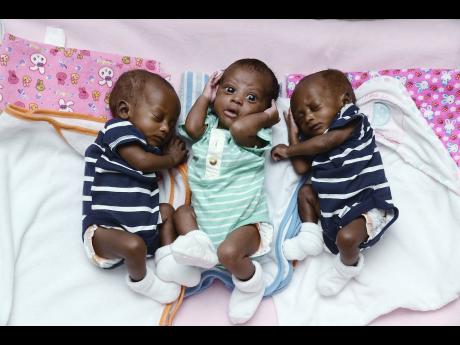 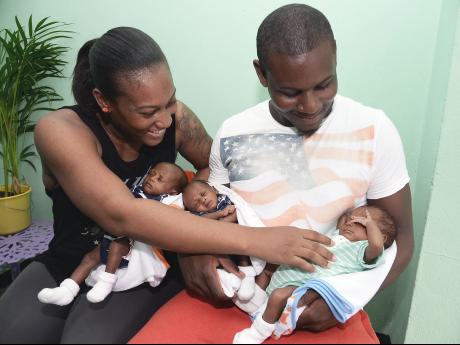 Jermaine Barnaby/ Freelance Photographer George Clarke and his fiance, Codenia Miller with their triplets at their Waterford home in Portmore, St Catherine on Thursday.
1
2

They are developing healthily and impressively despite the passing of the smallest girl, Kayla, on June 26 after complications she developed while at hospital.

Little Keeran, and his sisters Kerah, and Keya are now six weeks old and were discharged from the Victoria Jubilee Hospital three weeks ago, where they were being monitored having been born prematurely.

Though still heartbroken over the passing of their daughter, the parents light up every time they speak of their remaining bundles of joy, who they said are already a handful.

"The boy jealous, him will just cry down the whole place and him nah stop until him come inna hand. Once him see him sisters in hand, him want you take him up too," Miller shared, adding that they are always mindful to give each baby equal affection.

Clarke, who works at Caribbean Broilers, added that he can't wait to get home in the evenings to be entertained by the babies.

"It's a joy to watch them. Sometimes you put them one their backs and you see them trying to flip over, or you see when them look on you and laugh, me just have to laugh," Clarke said.

Throughout the pregnancy, Miller said she was concerned that it would be extremely difficult to care for all the babies, but she said it has been far more manageable than she anticipated now that the babies are home.

"I always hear people saying it's hard having one baby, so it's going to be so even harder taking care of three. But I'm getting a lot of support from George who is here 100 per cent and my relatives," Miller said.

The parents said if it is God's will, they want to baptise the babies in September.

Having lost their twin boys last year to a viral infection at the University Hospital of the West Indies, the parents said they are extremely happy that their babies are all developing well without complications.

But, with healthy babies come a hefty diaper bill. The parents said the three little ones run through a pack of 32 diapers in just two days.

Thankfully, they received a year's sponsorship of diapers from diaper company Lovable.

But so far, no other entity has helped. The parents said they would greatly appreciate donations of toiletries and other baby supplies, and added that it would be good if the government could also give a helping hand.

Those wishing to assist may contact the parents at 333-8065.