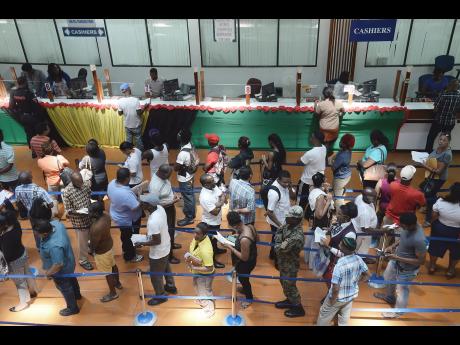 In this August 2 file photo, persons are seen at the Constant Spring Tax Office making use of the ticket amnesty.

If the turnout at the Tax Administration Office in downtown Kingston on Wednesday was anything to go by, persons with outstanding tickets were not in a heated rush to take on the Government's traffic ticket amnesty on its first day.

A man who was standing in line at the tax office admitted to THE WEEKEND STAR that he has about 15 tickets amounting to some $35,000, but his business at the office was unrelated to his ticket offences.

"Me get nuff tickets because me work inna the transport sector and have to drive all over the island. About 10 of them is for seat belt. Me need a payment plan for that, because I don't have that amount of money just lying around," he said.

Similarly, an elderly man said he has about eight tickets that are needed to be paid. However, he said that he will not be taking up the amnesty immediately, as it is just a scheme by the Government to make money.

"A 'robbing you' me call them, not revenue office. A money dem a look. That's why them come een with this [amnesty]. What happen to the man wah have 200 tickets? Authorities fi stop them from driving. Dem nuh fi get amnesty," the senior citizen reasoned.

Another quickly asserted, "Me have some, but me nah pay that today, enuh!"

He further theorised that most Jamaicans will wait until the last minute to take advantage of the amnesty.

However, that theory did not apply to one man who said he had about 20 tickets outstanding. He was busy enquiring about the procedure for taking up the amnesty.

"This is something I've been waiting on because the police them a give me too much problem a road. Me haffi a give them too much money," he said.

The amnesty for delinquent motorists will run from August 2 to October 31, allowing motorists to pay outstanding traffic tickets without attracting demerit points. It will also be giving them the opportunity to begin with a clean slate before the new Road Traffic Act is introduced.

The Government is seeking to recover some $2.8 billion from the amnesty.