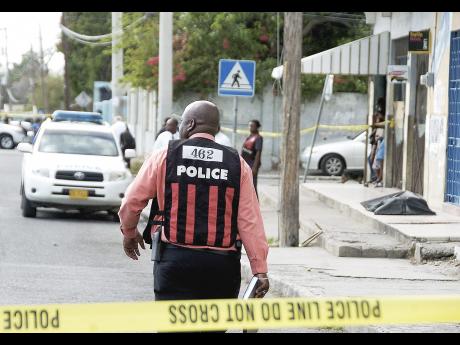 A policeman at a crime scene.

"A number of the spent casings may have been trampled, but we were able to retrieve just about that [300], but if we include bullet fragments and live rounds, it could be over 300," he told THE WEEKEND STAR.

"Residents are traumatised, and I believe that the residents genuinely want a change in their community," he added.

The deceased person has been identified as 20-year-old Andgel Henry.

Brown said the police are yet to determine a motive for this specific attack, but noted that there have been a number of violent flare-ups in Rockfort.

"We have been able to take into custody three persons responsible for violent flare-ups in Rockfort, and we are seeking other persons who can assist us, not necessarily in the Oliver Road incident," he said.

He noted that conflict between Oliver Road and an adjoining community is separate from what is taking place in other sections of East Kingston.

Brown believes that the police have made a dent in controlling the violence in other sections of the East Kingston by arresting a number of persons for murders and shootings.

However, he said the police are still seeking some persons of interest, who are not connected with the Oliver Road incident. They are Dwayne Barrett, otherwise called Nooksy, in relation to serious crimes; Anthony Johnson, otherwise called Screw, of a Barnes Road address; and Andrew Facey, otherwise called Andrew Pang.

"If we were to take these persons into police custody, then there would be significant improvement in terms of quality of life in Rockfort," Brown said.