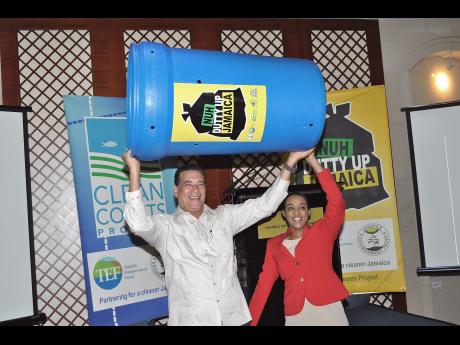 Mayor of Montego Bay Homer Davis, and T'Shura Gibbs, president of the Montego Bay Chamber of Commerce, at the launch of the Nuh Dutty Up MoBay campaign.

Unhappy with the perennial problem of the improper disposal of garbage in Montego Bay, the city's no-nonsense mayor, Homer Davis, is recommending a buy-back of plastic bottles to create an incentive to embrace cleanliness.

"Let us encourage the buy-back of these plastic bottles, not necessarily by the bottling companies, but by the Jamaica Environment Trust (JET) itself," Davis told environmentalists, including representatives of JET, at the recent launch of the Montego Bay leg of the 'Nuh Dutty Up MoBay' campaign.

"This has been a longstanding problem and I believe the time has come to find creative ways to encourage compliance ... . I believe the buy-back of plastic bottles would be a good start," added Davis.

JET, through funding from the Tourism Enhancement Funds (TEF) and other partners, spends millions of dollars each year to clean up Montego Bay's garbage and other waste materials, in keeping with the agency's 'Nuh Dutty Up Jamaica' initiative. This year, the TEF is pumping some $47 million into the campaign.

"I think the buy-back is something that we should look at doing because, in my opinion, if you spend $10 million to $20 million to buy back bottles, I am sure it will cost less than what we seek to do now," said Davis.

While not rejecting the suggestion, Diana McCaulay, CEO of JET, said such an undertaking would be challenging for the agency, albeit noting that recycling is a great option.

"Plastic bottles are made from petroleum and with oil prices low as they are now, the prices you can get from the plastic bottles is so low that it hardly pays for the cost of shipping it overseas to places where it is recycled," explained McCaulay.

At present, JET and its partners are gearing up for International Coastal Clean-up Day on Saturday, September 16.

Over 10,000 volunteers are expected to turn out this year in the hope that Jamaica will be placed among the top 10 participating countries in the world.