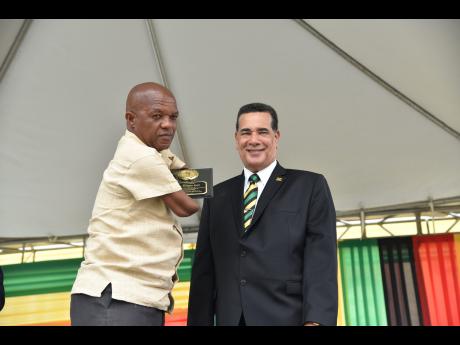 Winston Barr, proprietor of Ju-cee Barrs in Maroon Town, St. James, shows off his Spirit of Independence award during the annual St. James Independence Day Civic Ceremony which was held in Sam Sharpe Square, Montego Bay on Sunday. Looking on is Mayor of Montego Bay Homer Davis. Barr lost both arms in an accident several years ago. 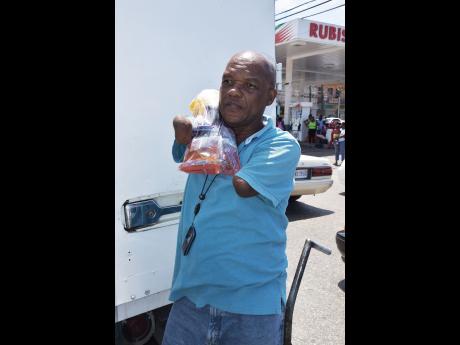 This year's 'Emanci-pendence' celebrations have come to an end, but being independent and selfless is a permanent way of life for double amputee, Winston Barr, who was conferred with the Spirit of Independence Award at the annual Civic Ceremony in St James on Sunday.

Barr was awarded for his outstanding contribution to entrepreneurship in the parish.

The 54-year-old, who lost both arms in an electrocution incident some 35 years ago, owns and operates Ju-cee Barrs bag juice factory, in Maroon Town. He was also instrumental in implementing a water supply system in his Woodland community some 15 years ago, which is still in use today.

Barr told THE STAR that he is unsure who nominated him for the award, but he is humbled that his work and contributions were recognised at such a level.

"I was called by somebody from the St James Parish Council, I think from the Mayor's office, to tell me that I'm one of the awardees for the Spirit of Independence Award for the fact that I have so much challenges and still find the will to do what I'm doing," Barr shared.

In addition to his bag juice factory, Barr is also trying his hand at another business venture in the natural spice industry, which he plans to introduce to the public soon.

"Do what you're doing, like you're the only person left in the world to do it and the world is depending on you," Barr advised.

"This is a man who has lost both arms over 25 years ago and still did not sit and expect someone to be of help to him by giving him his daily needs. That man has built a life as any ordinary person who has suffered no amputation whatsoever. He is married and he has his children. He's doing a tremendous job in is bag juice business and that business is over 20 years old," he said.

Davis added that he was particularly moved by Barr's undaunted spirit, despite the loss of his arms.

"What was most touching is that when I was presenting him with the plaque, he said, "No, Mr Mayor. Give it to me, I can hold it!" I saw both portions of his arms come together and grabbed the thing. It moves me," Davis said.

Barr was among five persons to be awarded with the Spirit of Independence Award at Sam Sharpe Square in Montego Bay. Nine persons also received the Mayor's Special Award, and renowned reggae crooner Jimmy Cliff was presented with the Key to the City of Montego Bay.