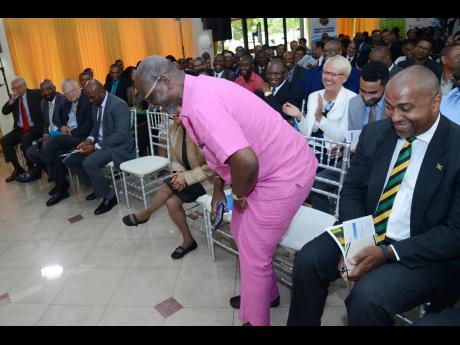 Rudolph Brown photo These was laughter galore at the Office of the Prime Minister in Kingston on Wednesday as local government minister Desmond McKenzie turned up for a function dressed in a pink shirt and matching pants.

Today, the West Kingston Member of Parliament lit up the Executive Building at the Office of the Prime Minister in Kingston when he turned up for a function dressed in a spanking pink shirt and matching pants.

McKenzie was attending the launch of the government's portal, gov.jm.

McKenzie's sense of fashion left the gathering, including justice minister Delroy Chuck and technology minister Dr Andrew Wheatley, as well as other dignitaries, in stitches.

"It's gov.jm and that is the information portal for the Government of Jamaica. Anything ... well ... Potentially, anything that you would want to know ...," said the prime minister.

He paused and stared at McKenzie, who was seated in the front row.

"So if you want to know where the minister gets his suit, check the portal," Holness joked.

McKenzie, for his part, stood and acknowledged the cheers from the audience. An amused Holness chimed in and said: "Very brave, very brave."