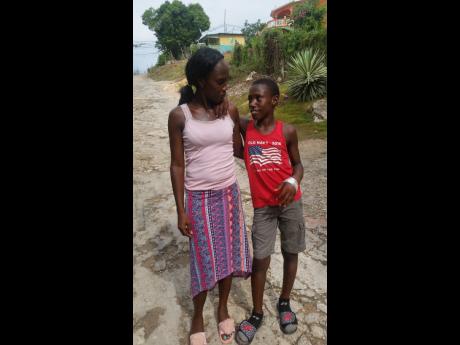 Leon Jackson/ Freelance photographer Donnaree Carr of Duncans, Trelawny, is glad to have her son, 12-year-old Raheem Newman, back home after his near-death experience on Monday. 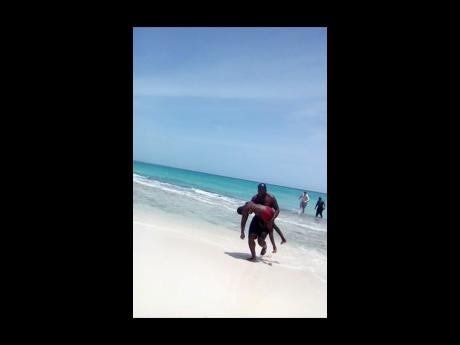 Contributed Chaplin Smith in action as he pulled Raheem Newman from the water.
1
2
3

“Nothing short of a miracle” is how the parents of 12-year-old Raheem Newman describe their son's survival after he was swept away by a massive wave at the Silver Sands public beach in Trelawny and was thought to have drowned.

The parents, Tristan Newman and Donnaree Carr, of Duncans in the parish, are still heaping praises on bystanders, in particular Chaplin Smith, who jumped into the turbulent waters to rescue their boy.

“When the doctor them look at the x-ray, them say it’s the x-ray of a dead man them looking at because of the amount of water inna him lungs. It’s really a miracle that him alive,” Carr told THE STAR.

Raheem, a seventh grader at the Muschett High School, was discharged yesterday and is in good health. However, the memory of the frightful ordeal is still etched in the minds of his parents.

Carr told THE STAR that her family decided to visit the beach because it had been years since their last trip. She, along with Raheem and others were playing in the shallow waters near the shore when a massive wave tossed them further into the sea.

“Him call out to me and I was trying to grab after him but the water keep bringing him out more. Oh Jesus! Me did feel helpless because me can’t swim so me run out a the water and call fi help,” Carr recounted.

Chaplin Smith, a Trelawny carpenter who was on the beach with his family, saw Carr running and shouting that her son was drowning.

He told THE STAR that he sprang into action, despite his sister’s warning that he should not go as he cannot swim.

“Me say, ‘sister, swim or not, me a go fi him'!” Smith recounted. “A Rasta man reach before me and it’s like the Rasta man think the boy dead and start cry and leave him. The water reach up to me neck but me go fi him and start bring him in. Me start pump him, and a white man start give him the blow of the mouth.”

He shared that other bystanders started panicking, thinking the child had died because he was foaming at the mouth and his eyes had rolled over, but he did not give up. He kept pumping and praying.

Smith said his sister called their bother, who is a doctor overseas, and he gave instructions to turn the child’s head to the side and disperse the panicking crowd from around him.

Soon after, the boy was whisked off to the Falmouth hospital where he underwent emergency treatment. He spent two nights there.

Raheem's parents said they regard Smith and others who aided in their son’s rescue as superheroes, and they are eternally grateful for their selfless act.

Note: This article was updated to make it clear that the incident happened at the Silver Sands public beach.