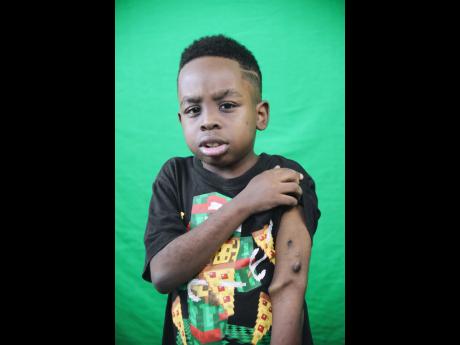 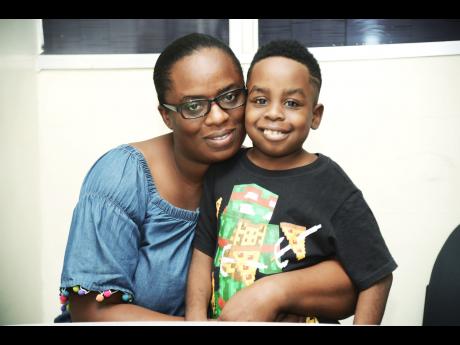 Keisha Senior and her son, David Virgo, are both optimistic despite David's disease.
1
2

Little David Virgo has been battling renal failure and the struggles associated with the disease since he was three years old, but the brave-hearted boy has refused to allow his ailment to dampen his spirit.

Now 10 years old, the youngster spoke eloquently about his condition, and was sure to note that he is not daunted by it.

"I have kidney problem, and if I drink a lot of fluid, I get puffy and I have to do dialysis to take out the fluid out my body," he shared, adding that his passion is to become a doctor or nurse to care for others.

David, who is a fourth grader at the Phoenix Academy in Kingston, is a constant source of joy and motivation for his mother, Keisha Senior, despite the many financial struggles she incurs due to her son's condition.

"Regardless of David's situation, he's always this upbeat and vibrant child. Nothing seems to get David down. Even when I'm here stressing and crying, he is always optimistic. Sometimes he will say,:'Mommy, stop the crying, everything all right'," the 37-year-old mother said.

Senior lives in Chester Castle, Hanover, and works as a sales representative in Westmoreland. However, David lives in Kingston with a paid guardian so that he can get specialised treatment at the University Hospital of the West Indies (UHWI), where he undergoes dialysis three to four times per week depending on his condition.

David sometimes leaves school early for dialysis, but he still manages to cop averages in the 80s and 90s, the proud mother shared.

Though she has always tried to be strong for her only son, Senior became quite emotional as she revealed that the challenges started at birth, when doctors informed her that David was born with abnormally small kidneys, which has caused a retardation in his growth.

However, it was not until he was three years old that David was diagnosed with renal failure, after displaying some strange behaviours, such as hallucinations, followed by an extremely high fever.

After his diagnosis, David had to undergo peritoneal dialysis, which shook Senior the first time she witnessed it.

Senior shared that over the years, David has been admitted to the hospital for extensive periods, sometimes more than six months due to high blood pressure associated with kidney failure. It has caused her to rack up a hefty medical bill at the UHWI, exceeding $5 million.

Nonetheless, Senior said she tries her best to stretch her humble income to pay for David's caregiver, his medications, and hospital bills.

Luckily, the cost of dialysis is taken care of by the Kidney Kids Foundation (KKF), which was founded by Dr Maolynne Miller in 2012, to assist children with the condition.

"Thanks to the Kidney Kids Foundation and those who fund them. If it wasn't for them, I don't know if David would be here today because I can't really afford to pay for dialysis," Senior said.

Despite the difficulties, Senior said she will continue to do everything in her power to care for her son until God is ready for him.

Anyone wishing to assist may contact Keisha Senior at 838-8329.