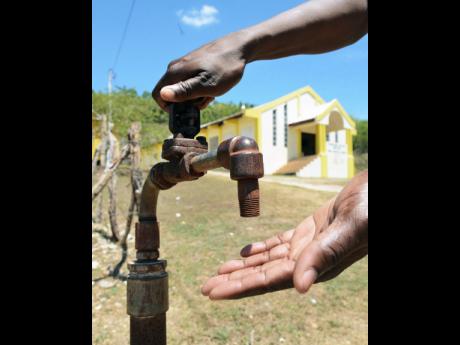 An infuriated resident of Red Ground, Westmoreland, has come forward to lament that members of the community have not seen a drop of water in their pipes for the past six months, while the neighbouring resort area Negril is 'swimming' in the sparse commodity.

"I feel we have been pushed to the side, and it's not nice to live in a country where you have to be doing without an essential of life, and be put aside for people who come here," a resident, Kareen Grant, bemoaned.

Grant, who has been a resident of Red Ground for seven years, said she lives just five minutes drive from the resort town, and while persons in Negril have a constant supply of water, she and other residents in Red Ground have to be shelling out at least $6,000 per barrel for the commodity every week.

"I take it up on my head because I can't do it anymore. There is a standpipe in the community, so even if the water wasn't coming in the little lanes, the standpipe was still running. That standpipe has been dry since about February, meanwhile, they have lots of water down in Negril," Grant told THE STAR.

She said she feels it is disrespectful for such an essential commodity is guaranteed in the resort areas for the benefit of tourists, but some residents who live nearby are ignored.

An irate Grant continued to note that she is cognisant of the importance of tourism to the economy, but reasoned that "Jamaicans should be prioritised too."

"We shouldn't feel like we are being pushed aside and we are the outcasts in our own country," she added.

When THE STAR contacted Charles Buchanan, corporate public relations manager at National Water Commission (NWC), he raised the issue of whether the residents making the complaints are paying customers.

"I'm not insensitive to the need for water, but I raise the issue because there is a long-standing problem in Jamaica where persons make demands for water supply service without making a connection between their ability to receive the service and their making payments for the service," he said.

Interestingly, Grant admitted to THE STAR that she only knows of a few persons in the community who actually have a contract with the National Water Commission (NWC), and said the community largely relied on the standpipe in the area. However, she noted that the pipes of paying customers have been dry since February.

Meanwhile, Buchanan said his checks revealed that there were water supply issues in western Westmoreland earlier in the year during a severe drought, however, it has since been rectified. He said if customers in Red Ground are experiencing difficulties, it might be a localised one that the commission is not aware of. Therefore, he said a report should be made to address the matter.

Member of Parliament for the area, Dr Wykeham McNeill, could not be reached for a comment on the matter.