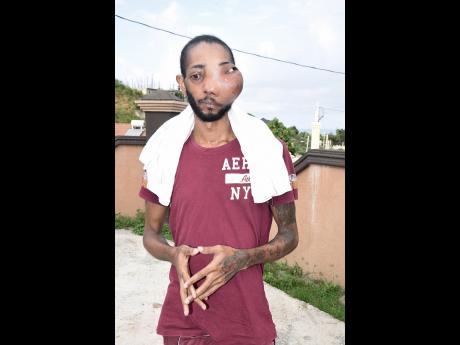 Jermaine Barrett before his surgery in 2016.

Jermaine Barrett, the young man who has been suffering from a massive tumour on his face, will return home today after more than a year of treatment in the United States. Doctors have said that they can do no more for his condition.

Barrett's mother, Jean Carroll, told THE WEEKEND STAR that after multiple surgeries, and the loss of his eye, the massive tumour is back, and Barrett's condition has drastically deteriorated.

"The tumour is back in the same eye, and it's out in his face again. The doctors have tried their best for him. To me, the doctor them cannot do anything more. His mouth is swollen. He does not have any teeth, and he cannot eat any food, only soft things like green juice. Sometimes his heart gives way," Carroll said.

"We have to have him out here beside his family now. They do as much surgery as they could do. He has done about seven or eight surgeries. The tumour is back. They can't do anything about that again."

Twenty-eight-year-old Barrett of Flankers in St James was first featured in THE STAR in April 2016, when he was pleading for help to go overseas to treat what was then a mysterious growth on his face. It was later diagnosed as a cancerous tumour.

Barrett's story created waves across the island and got the attention of Prime Minister Andrew Holness, who made a commitment to assist him to get treatment overseas.

After his first round of surgery at a New York medical facility in June 2016, Barrett lost an eye, but was showing signs of improvement, and hanging on to hope that he would be cured of the disease.

However, his mother now says things have taken a turn for the worse, and she is in turmoil.

"It's very, very difficult for me. Sometimes, me feel sick. I cannot eat. He's my one son. If he was on his feet, I would be OK because he normally takes care of me. So, to be seeing him like this, sometimes I don't want to talk about it," said Carroll, who is a vendor of Mount Salem in St James.

She further explained that Barrett will be escorted home by Shena Carty, a woman who has been of tremendous support to Barrett and the family during his treatment.

Carroll said she is imploring everyone to offer any form of assistance possible, and to keep her son in their prayers as he returns home.

"He's going to need a lot of help. He needs food. He needs attention. He needs loving. He needs moral support," she said.