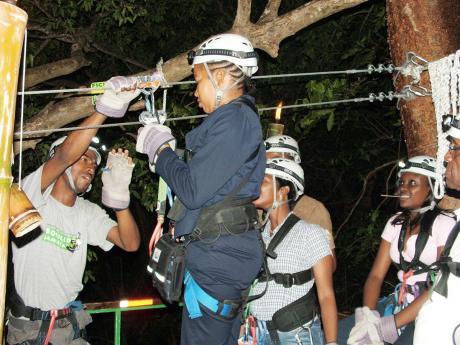 Visitors partaking in the zip line tour at Mystic Mountain.

Four tourists and six tour guides were yesterday rushed to the St Ann's Bay Regional Hospital after they were struck by lightning at the popular Mystic Mountain tourist attraction in St Ann.

Managing Director of the attraction, Mike Drakulich, told THE STAR that no one died during the ordeal and all persons are stabilised. He said the affected persons were travelling on the day's final zip line tour about 4:30 p.m. when the freak accident occurred.

"The lightning was a surprise because there was no indication of lightning or thunder before the tour. We can't determine where the lightning struck if it was the tree or the line itself, but it travelled and affected people on the tour. It actually struck several places on the property," he said.

The affected persons were whisked off to hospital in four ambulances based at the attraction.

Drakulich said the venue was closed immediately and patrons were escorted off the property.

Up to press time last night, the affected persons were not discharged from hospital.

Drakulich said operations would be back to normal at the facility today.