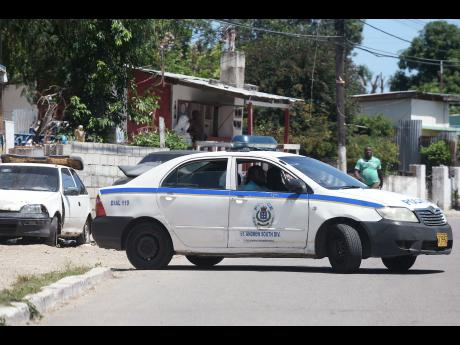 A police service vehicle on patrol in Maverley.

Commander for the St Andrew South Police Division, Senior Superintendent Arthur Brown, said residents of Maverley can expect an increase in snap raids and stop and search as the police try to prevent another outbreak of violence in the community.

This as two persons were murdered between Sunday and yesterday within the vicinity of the community.

Brown said the police checks would include "both pedestrians and motorists alike."

"They have been seeing the police's presence and they will continue to see the police presence," Brown told THE STAR.

According to reports from the police's Corporate Communications Unit, about 6:06 a.m., the police were conducting follow-up operations in the Maverley Park area when residents alerted them to the body of man that was seen lying on a field near the entrance of the community.

The crime scene was processed after which the body was removed to the morgue. It was discovered that the man had several gunshot wounds.

At about 11:50 a.m., Sattel was walking along Elma Crescent, Kingston 20, when he was attacked and shot by a gunman. He was taken to hospital, where he was pronounced dead.

"The police can't be everywhere at the same time, so regardless of our presence in there, from time to time, we will have some issues that will occur even though we are on the ground. So what we do is try to cover the space as best as we possibly can to prevent the atrocities and the criminal activities from taking place," Brown said. "We won't stop until we get rid of the perpetrators of the criminal activities."