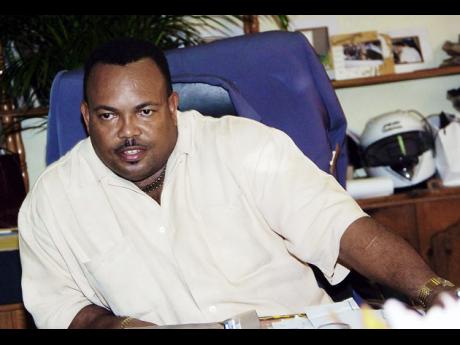 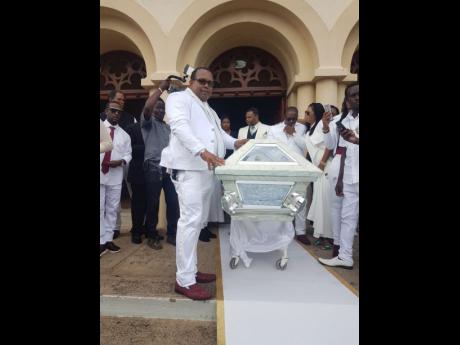 Brite Lite's Tommy Thompson poses beside the elaborate casket that was done for his son. 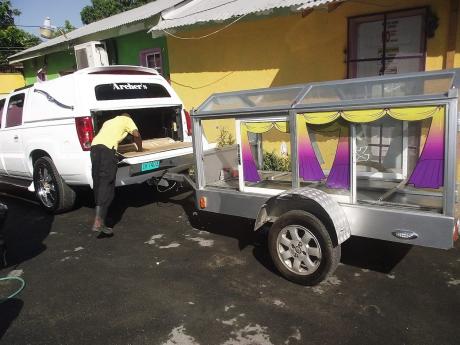 This chariot from Archer's Funeral Home and Supplies isn't an uncommon sight at funeral these days. 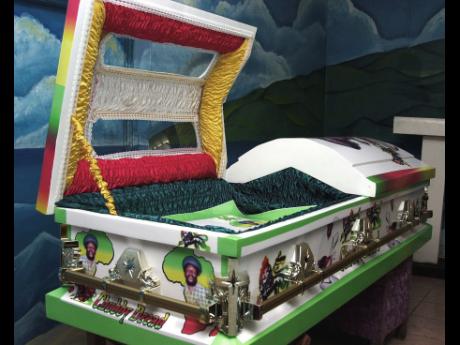 Tommy Thompson, the director of Brite Lite Funeral Services and Supplies, says flashy funerals help to take the minds of family members off the fact that they have lost a loved one.

Thompson, who buried his son, Andrew, on the weekend told THE STAR that some funerals have moved away from being an emotional event to a celebration.

"What is presented, I can say normally helps to minimise that traumatic effect of losing someone," Thompson said.

"The presentation, the casket, the way the church looks, the kind of vehicles that are used. There are so many things that sometimes put a happy smile on that person's face at that point in time," he added.

"People will talk about the funeral depending on who does it and how it is done. So, they feel happy about what was executed by Brite Lite, for example, and they feel elated," he said.

Since his company started to operate in Jamaica, Thompson is of the view that they have managed to change the landscape in terms of how funerals are done.

"We had blings inside of graves. At one point, we did a funeral for a well-known personality in this country, and electric light was run into the cell with wallpaper on the walls into the sepulchre, so you could switch the light on and off," he told THE STAR.

However, he argues that while it might be costly to have a flashy funeral, it helps to alleviate some of the emotional stress that persons close the individual may go through.

"It can run you money depends on what you want. For instance, if a man comes in and says: 'I want six or seven limousines, three hummers to draw a chariot, you want drones, you want the church to be plastered with exotic flowers, you want a programme that somebody can look at for a long time, you've got to have money to do a funeral like that. Also, if you want an exclusive spot at Meadowrest or Dovecot, it comes with a cost," he said.

Just as he would do for his clients, Thompson said he went all out to ensure that his 29-year-old son was buried in style.

"If I was to put a price on my casket, they would have to pay a lot of money if I was product costing to make a presentation like that for somebody else. However, it was a cohesive effort. Most of his brothers and sisters from my side, they were all there working on the casket, putting it together. The design that we did, everybody played a role," he said.