Inner-city youth being empowered through debating 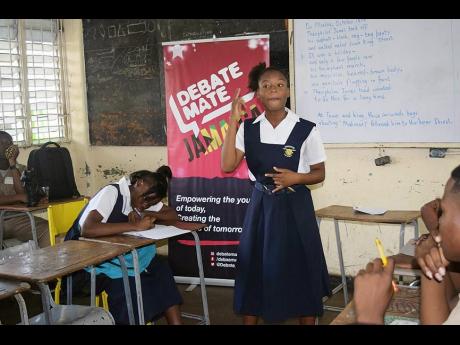 This student appeared to be very passionate as she made her point. 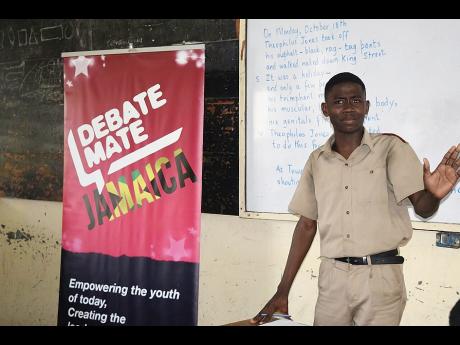 An important part of debating is ensuring that one is convincing.
1
2

Charity organisation Dabate Mate Jamaica has employed a number of university students to go into schools in impoverished communities across the island to teach students important life skills through debating.

Director of Debate Mate Jamaica, Jessica Hudson, said that they have employed university students as they are hoping that they can inspire the students to get to their level.

Hudson said 19 schools have agreed to have the programme, which will run for 21 weeks this year.

"We target areas with poverty and violence. So, schools in Jamaica that we usually go into are like Tivoli Gardens High School, Dunoon Technical High School and Denham Town High School," Hudson said. "We will go to each school one day per week for the 21 weeks."

Hudson said that the project also aims to get the students engaged in something positive after school.

"We also want to ensure that these students are occupied after school, and we want to occupy them in a positive way that can have a positive impact on their lives," Hudson said.

Debate Mate Jamaica was inspired by Debate Mate UK, which was founded in 2012.

According to Hudson, the British founder of the Debate Mate wanted to empower children in poverty across the world, through debating.

"The Debate Mate in the UK has summer programmes in Rwanda, Botswana and countries like those," Hudson said.

She said Jamaica was one of those countries Debate Mate UK would visit in the summer, but after a successful campaign in 2014, Hudson and her colleague were given the green light to launch a full programme in Jamaica.

"Jamaica is the only other country apart from the United Kingdom that has a year-long programme," Hudson said.

The launch of this year's activities is set for October 24.

"Right now, we are in touch with the schools to get the students from the 19 schools at the launch," Hudson said.

"(At the launch), we are also gonna have some debates. So, the past kids from the year before and mentors will make up two teams, and we will have a show debate to get the students excited," she said.

Debate Mate Jamaica was launched two years ago, and Hudson said the programme has had a tremendous impact on the students who have been involved.

" It has been really good actually because at the end of the year, we have a report that we ask the teachers to give us and they have shared it with us. And it shows that the students who have been a part of Debate Mate scores have improved," Hudson said.