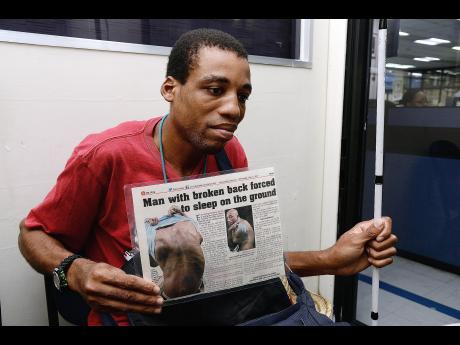 Odaine Campbell is once again appealing to the Jamaican public and the Government for help.

Campbell, 29, is blind, and living in a single room without light and water. He has been to numerous places for help, but has been denied help each time with a different reason.

"I went to the Poor Relief in downtown [Kingston], and they said they didn't have any bed for me there," he told THE STAR.

He said he went to other institutions, but he was also denied help from these places on the basis that he did not have any life-threatening ailments, and the fact that he is not old enough.

Despite his inability to see, Campbell has to pay rent for the room he occupies in Spanish Town.

He told THE STAR that in order to pay his rent and get something to eat, he has to beg.

And at times, this way of getting money is not enough, so there are days when he has to go without food or even a shower.

Campbell, whose back was broken in an accident some years ago, explained that losing his vision is his newest struggle.

"When I went to the doctor with my eyes, he told me that I had a cataract and glaucoma from I was small," Campbell said.

This, he said, led to the condition becoming permanent.

"The doctor told me that because my condition was not addressed from I was younger, it is now irreversible," he said.

Despite the struggles he is now facing, Campbell said life was not always like this.

Although he was rejected by his mother and had to be raised by his grandmother until he was 16, he said he started a good life at age 21 when he got married. From the union, he and his deceased wife produced three children, ages seven, five and three. After the death of his wife, he said that the State took his children because he broke his back in an accident.

He added that before his woes, he was also a hard worker.

"I was a strong person. I worked at the National Solid Waste Management Authority before, but then all this happened. I am not a person to beg, but I am in need," he told THE STAR.

As a Christian, who has been baptised at the Church on the Rock in St Andrew, he said that he is praying and believing that someone will help.

Anyone wishing to assist Odaine Campbell may contact him at 468-8891.