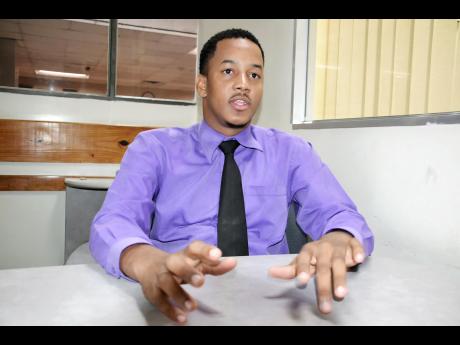 Julius Thomas chronicles his struggles to get a tertiary education.

Julius Thomas, who was born and raised in Cockburn Gardens in St Andrew, has defied all odds and graduated from the University of the West Indies (UWI) this year with a double major in accounting, as well as banking and finance.

Life was not a bed of roses for Thomas, who lived with six siblings.

"Growing up, it was difficult but I was not bothered by my situation. Even though I was sharing a bed with some of my siblings, it became a situation that I accepted. It (the situation) allowed me to think of my life and what I wanted. I didn't want this to be my life when I got older," he said.

Thomas often went through the day with one meal or went to school without lunch money.

His mother worked at the Jamaica Biscuit Company and with the little that she had, managed to send him to school. His stepfather also helped him with what he could.

After graduating from Mona High, Thomas got some financial help from his aunt when he started sixth form at St Jago High. However, that help stopped at the end of his first year.

"My aunt told me that she was unable to care for me anymore. She could no longer afford it," he said. He, however, got some help from some persons he knew.

Despite the lack of funding, Thomas was not about to give up on his dream of attending university.

After finishing sixth form, he enrolled in the UWI. With some financial help from a church member, Thomas was able to complete his first year.

He took a leave of absence for his second year and tried the work and travel programme offered to tertiary students, but this did not yield the money he needed.

He had applied to the Students' Loan Bureau (SLB) before he left, but when they emailed him about the interview, by then he was overseas and the date passed.

He started working at Sutherland Global in 2013 to help save to finish his schooling. There he stayed for two years. After that, he attempted to complete his second year, which he did with the money he had saved while working.

But things got hectic in the second semester as he owed school fees. He tried applying to the SLB again but this time he was denied, "so in my second semester, I asked some friends from here and abroad to help me."

He was able to sit his exams and had a year left in school. Thomas was determined to finish so he wrote a letter to the Office of the Prime Minister seeking help before the start of his final year.

Thomas said after multiple calls and visits to the office, his prayers were answered because they offered to pay all his outstanding fees.

With this help, he was able to complete school and is now doing internship at the Ministry of Finance and Planning.

His advice to young people is "set your mind to whatever you want to do."

"Even though there may not be people there to help in the time you want, never stop believing in yourself and your ability to achieve," he said.