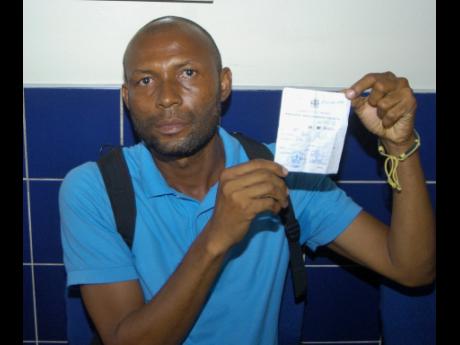 Pastor Roy Mullings displays a court document which indicates that Paul Hall paid a $3,000 fine in the St James Parish Court on Tuesday.

A homeless and disabled man is today drowning in disappointment after his goods mysteriously disappeared from a police station in St James.

The man, Paul Hall, had gone to the Barnett Street Police Station to pick up his property after leaving the Montego Bay division of the St James Parish Court.

According to Roy Mullings, pastor of the Ambassador for Christ Church, the police seized 20 handmade bead necklaces from Hall and charged him for exposing goods for sale without a licence.

"This man is in a wheelchair. He lives underneath a tree. Him beg to get through the day, and a this way them treat him. This is unacceptable," Pastor Roy Mullings said.

The pastor told THE WEEKEND STAR that in addition to losing his goods, Hall was not able to be in court for his matter because the court building was not disabled-friendly.

Mullings, who accompanied Hall to court, had to go and represent him.

"When I went before the judge, she didn't give me a chance to explain anything. She just ask guilty or not guilty. After me answer, she gave a $3,000 fine or five days in prison," Mullings said.

Hall said that he was very grateful for Mulling's help, but he wanted to go before the judge himself.

"Mi glad for Pastor [Mullings] help, but me did wah go before the judge myself so him can see me situation. Hopefully, him coulda pardon me," Hall said.

The disabled man told THE WEEKEND STAR that his run-in with the State began on Heroes Day, October 16, when he attempted to earn his meals by selling some hand-craft items to tourists on the Hip Strip.

"I thought they would give me a chance to do this little selling because it was Heroes Day. The police saw me showing a set of necklaces to someone who didn't even pay me attention," Hall said.

"Mi don't have any other means of living. Mi beg every day. Me nuh live nowhere."

Hall said that after paying the fine, the pastor followed Hall to retrieve his belongings from the police station. However, after showing his receipt for the fine he paid, he was told by officers that they could not locate his things.

"When me go inna the police station, them tell me that they don't know who took my things," said Hall, who valued each of the necklaces at $100.