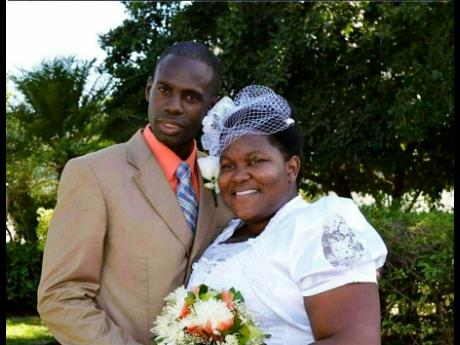 Danyelle Belnavis-Hylton and Alwayne Hylton were celebrating their first anniversary on the weekend when tragedy struck.

On Saturday, their anniversary date, both were on their way from Montego Bay to their home in Greenwood, when the car in which they were travelling crashed.

Alwayne died in hospital on Sunday, the day they were to renew their vows.

"The taxi was trying to go in the left lane but it swung out too early. It (the taxi) hit a truck, swung and hit a wall," she said. "He (Alwayne) was on the side of the car that slammed in the wall."

Belnavis-Hylton said the driver fled the scene, but she is not worried about that at the moment.

"He will have his day with God," she said. She told THE STAR that she is focused on burying her husband "in a proper way."

"He was a man of God and now he has gone on to be with his Saviour," she said.

The couple had been courting for four years before tying the knot on November 11, 2016, and was gearing up to take those vows again a day after their first year as man and wife.

"We were coming from Montego Bay where we bought new rings and got them engraved because we were planning on renewing our vows Sunday (November 12)," she said.

She said that they were making plans to host persons who were not able to attend the wedding.

"We were on our way home to buy the cake and some food. We planned our vows. We were just planning something small," she said.

Belnavis-Hylton recalled the great time she had with Alwayne.

"Me nuh have no eye water leave to tell you the truth, and it is by the grace of God that I have strength. We had such a great time. There was not a dull moment. I cannot remember the last time that I cooked because he always cooked for me," she said, adding that they were best friends.

She said that she is not sure what she is going to do moving forward, but said that with God all things are possible.

"I am not sure how I will cope because we always do things together. Wherever he went, I was there and he was always with me," she said.

Belnavis-Hamilton told THE STAR that she is sad that her husband is no longer with her, but she believes that he has ran his course and that God knows best.

"The Lord took him for a reason and mi glad that he made it in (Heaven). He did well. He just finished building a baptismal pool at our church (Grange Pen United Pentecostal Church) and he has helped many of the other churches when they were being built," she said.

She added that she is not sure whether the police have found the driver or not but she is leaving that man to God.