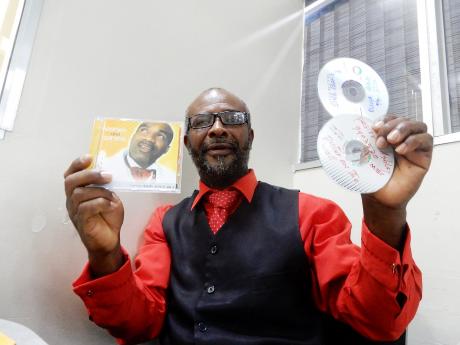 Devon Morris showing off some of his CDs.

Pastor of the Sabbath Day Church of God in Linstead, St Catherine, Devon Morris, is calling on the Government to give bootleggers on the street licence to promote and sell CDs.

Morris, who said he is also a recording gospel artiste and producer, said entertainers get better promotion from the men on the street than from radio stations.

"I have seven gospel CDs to my name. I got started in the promotional business because people used to bring their gospel music to me and I would promote it for them," said Morris.

Morris told THE STAR that he has been singing for over 20 years and started a promotional business about 21 years ago.

"Things were good until the Copyright Act because you have to sign papers at times to do promotion for folks, and at that time I was doing it for free," he said.

He said that the Government needs to collaborate with artistes to ensure that these bootleggers can promote them legitimately.

"The Government does not know the difference from the bootleggers than the people who get CDs for promotional purposes. There are so many media stations out there that some of your work gets lost in some of the media," he said. "If you want your work to be heard, you have to put it on the street. What the Government can do is to make sure these people are licensed because they are doing a lot of promotion for artistes, whether secular or not, and they are doing it for free."

But chairman of the Jamaica Association of Composers, Authors and Publishers Limited, Paul Barclay, said that he is against the idea of legalising bootleggers.

"It would definitely go against the Copyright Act. What they can do is sign a contract to say that they (the bootleggers) have permission from the artistes to copy their songs. (If we legalise it) we would be taking for granted that artistes give them the permission to copy their CDs," he said. "Outside of a contract, there is no way that we would approve something like that."