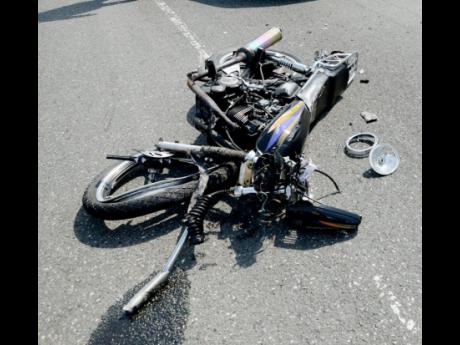 A Falmouth family will have to bury two males, both of whom have the same names, after they perished a few weeks apart.

Young Eric, who is also called Rod, was a student of Albert Town High School.

The police reported that the 15-year-old boy, who was a pillion on a motorcycle, was killed following a crash at Bogue Gate in Falmouth. The driver of the motorcycle, who is his cousin, has been hospitalised.

Young Eric lived with his grandmother, Annette Wilson, who has been left widowed by the death of the senior Eric.

"He is like my child, I have had him since he was eight months old," Annette Wilson, 60, told THE STAR.

She said that the loss of her husband was not unexpected as he was suffering with cancer. Nonetheless, she said that she felt it when he passed, but not as hard as the death of her grandson on Friday.

"This one died right in front of my very eyes. I saw everything the doctors were doing. I heard every question that were asked, every scream he was making, right up until his last breath," Annette Wilson told THE STAR.

"It was so traumatising," said Annette Wilson, who had to be admitted in hospital and treated for shock after her grandson died. "Every time you close you eyes, he is right in front of you, screaming."

Annette Wilson told THE STAR that arrangements were made for her husband to be buried on January 13. No date has been set for young Eric's funeral as his death is now the subject of a police investigation.

"I think that as soon as I am strong enough to go to the station, I will ask them if they can speed up the post-mortem," said Annette Wilson, who is in her darkest hour.