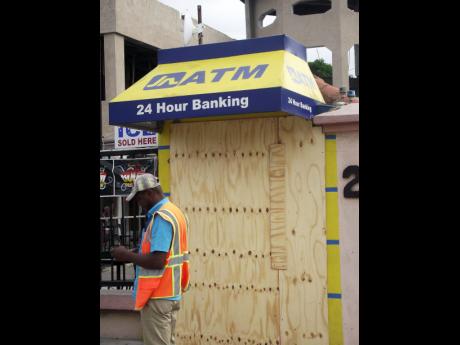 A workman stands beside the now covered booth that used to hold a Jamaica National ATM which was vandalised yesterday morning.

Many persons will be inconvenienced following the destruction of a Jamaica National Bank automated teller machine (ATM), by a group of hoodlums early yesterday morning.

The hoodlums wrenched the ATM from its booth and threw it on to a nearby pavement in Sydenham Park Way off Old Harbour Road in Spanish Town, St Catherine.

"This is what I use every week as I live in Old Harbour and it has been easier for me to transact business. This is very clear that criminals will stop at nothing," Marvin Teape, a security guard, said.

His views were echoed by others who turned up at the location to find plyboard nailed around the booth that once housed the ATM.

"It is sad that persons are now forced to go into di town (Spanish Town) when wi coulda just do we business here so. It is a very haad work dat di police dem haffi do as a real tief must do dis," a bystander said.

Personnel working at the booth said that it was one of the busier ATMs in the parish.

"I do not know if Jamaica National is going to replace it, as although they (the thieves) removed it, they did not get inside the vault. I cannot say much as I am only a contractor," one worker said.

The police said that the incident occurred about 3 a.m.

According to Operations Officer, Superintendent Ralford Hardy, the police were alerted to the crime by persons who spotted the hoodlums.

The St Catherine North police are continuing their investigation to capture the men who dismantled the ATM.