'I am done with her' ... Man accused of burning mother's house hits back 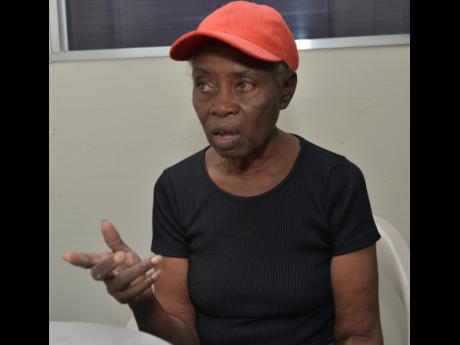 Days after his mother, Agatha Lovelace, visited The STAR's office in tears as she accused her son, Omar Lovelace, of burning her house to the ground, he is declaring that he will never again have a relationship with her.

"Me try too much time already fi have a relationship wid har. It nah go reach," said Omar, whose mother said he has a mental problem and lives in a fowl coop.

According to Omar, 39, his 66-year-old mother goes around peddling lies about him. He said that he would not burn down the house because it belongs to him. He also said that his mother lied when she said he lives in a coop and is mentally ill.

"Me never live inna no coop. All me do in there is cook and put some a me things in deh, because me don't stay at the house. I stay with a friend in the community or me stay with me girlfriend," he said.

But Agatha, having been told of her son's response, reasoned that he should never have a woman cooking in a fowl coop.

"Him seh dem nuh live in deh, so why dem have so much bags in there; and what kind a man mek dem woman cook inna fowl coop?" she questioned.

Omar told THE STAR that he had made multiple attempts to live peacefully with his mother, but when she goes around telling people that he burnt her house down that was the last straw for him.

"The Bible seh if the right hand offend yuh, yuh fi cut it off."

Omar said that his life was perfectly fine until his father decided to leave the family in 1992. From then, he says his mother has made his life a living hell.

"In 1992, my father told me that he was leaving the country and not coming back, and he wanted me to take care of the family, but after him leave, she start treat we bad. She throws us out of the house, over and over."

However, Agatha said her son is making up stories in order to seem as if he is the innocent one in the matter. She said his claim of his father leaving in 1992 and putting him in charge is false.

"Him father leave here in 1988, right after Gilbert, so me nuh know weh him a talk about. A man can leave yah in 1988 and put a 10-year-old in charge? And even if that was so, yuh tun big man now and you never even buy me a Chubby?" she asked.