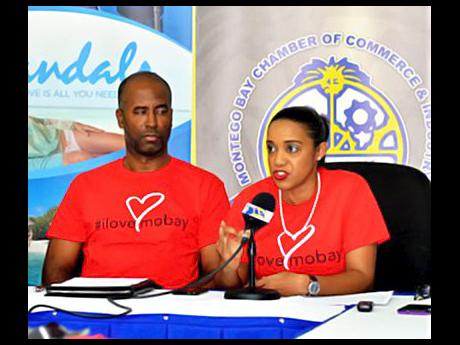 Residents of Montego Bay will soon be able to help restore the western city's civic pride and strengthen its economic viability through the upcoming 'I Love MoBay' campaign, which was recently announced at the Montego Bay Chamber of Commerce and Industry.

"Our aim today, as we launch the I Love MoBay Foundation, is to build back civic pride, to partner with the right organisations, and to make sure we are sending love all across the city and sending a ripple effect throughout all of Jamaica, the Caribbean and the rest of the world," T'shura Gibbs said.

Gibbs, president of the Montego Bay Chamber of Commerce and Industry, was speaking during a press conference to announce the February 16 start of the initiative.

According to Gibbs, who is also the executive director of the I Love MoBay campaign, the objective of the exercise is to sensitise and create awareness locally and abroad about Montego Bay's values and potential to boost its infrastructure, environment and socio-economic prospects.

Douglas Gordon, the founder and director of the I Love MoBay Foundation, said that the campaign will also highlight what the western city and its people are capable of achieving.

"I Love MoBay is an awareness and branding campaign and it's going to raise the sensibility of what Montego Bay is," Gordon said. "A big part of this is celebrating success stories, finding people from all walks of life who have succeeded, and telling their stories."