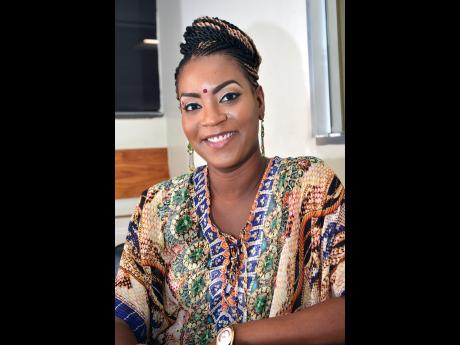 Ramona Riley thought that she would never have a child because of a disease affecting her womb.

However, she decided to heal herself and use her experiences to help others.

Riley, 35, said that when she was 28, doctors said she had to do a hysterectomy because she had adenomyosis.

Noted gynaecologist Dr Michael Abrahams said it is a condition where the walls of the uterus are sick.

The condition causes much pain, heavy bleeding and dysfunction. Riley decided against the hysterectomy.

"I went on a journey to do self-healing, and it has been seven years since I have healed myself of this disease, and it has not come back," Riley said.

Only three months after she started her journey, Riley got pregnant something she thought was not possible.

She told THE STAR that this experience inspired her to help other women who may be going through something similar.

She owns and operates Cosmic Wombman, which she started six years ago. She now performs womb healing in the United States and Jamaica.

Riley, known as the 'Vagina Lady' to many, offers consultation and healing, as well as womb parties.

These parties offer activities such as vaginal steaming, belly dancing, yoga for the womb, reproductive and vaginal information and meditation.

"I try to heal the body mentally, emotionally and physically. Many an illness is emotional and it turns to physical, so I try to heal from an emotional level first, kind of like healing from inside out," she said, adding that she also offers consultation over the phone.

Riley said it was important to her to educate young women so they do not end up in situations like her.

Abrahams explained that women who have adenomyosis can change their diet and lifestyle, which help to relieve their symptoms.

"It can affect fertility. I know changing your diet can help with your symptoms, but I don't know of anyone having adenomyosis and they change their diet and lifestyle and it went away. I have never seen that," he said.