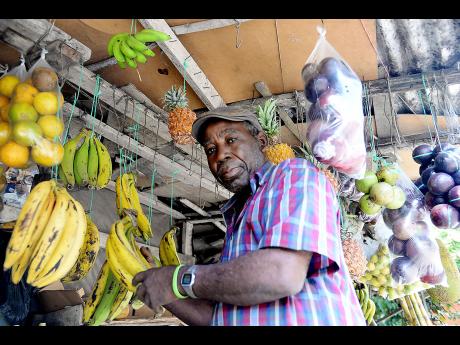 Cecil Douglas shows off his produce. 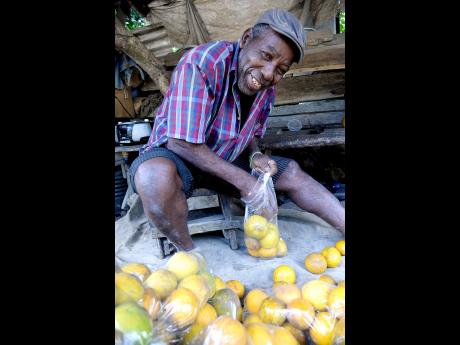 Cecil Douglas is all smiles as he puts the oranges in bags.
1
2

If you used to travel from the Corporate Area to Manchester back in the day, you may have realised that, these days, there are fewer fruit vendors in the Scotts Pass area in Clarendon.

The area was known as the fruit hub for persons travelling to Manchester and Westmoreland, as stated by one of the remaining fruit vendors, Cecil Douglas.

Douglas, 65, said that he has been selling fruits in the area for more than 40 years, and this was something he grew up seeing his mother do.

He added that since lately, people are leaving because the business has lost the hype it once had.

"When me did young a go school, yuh know seh yuh have a set a persons weh come and get dem fruits. One time, all every Thursday Yellowman come up and tek a portion," said Rose, who grew up around her uncle selling fruits.

"You had big persons in society that would come and take a portion, so you know that those goods are going to be sold. Dem sup'm deh nah happen again. Yuh nah see them things deh again," Rose added.

Douglas said that at this point, he would not encourage anyone to start a business like this, especially in Scotts Pass, because they are not making as much money as before.

"To do the stall thing now, you have to be brave. That's why right now, I would not advise a man to go inna stall. If you in there, you can stay in there, but if you not in there, don't come," he said.

He said that he has to be selling various kinds of fruits to try and make ends meet.

"Yuh see weh me haffi do deh now a sell cane, ripe banana and dem likkle sup'm deh. Yam, potato, everything, so when you nuh sell one, you sell the other. At least you must get a sale, if a even one sup'm," he said.

"Me experience a lot of loss, because I have to throw away a lot of food that don't sell. I can't sell spoil fruits to people, because you want them to come and buy again. So, it might burn you pocket, but at least people satisfied with what them get," he added.

He told THE STAR that even though he is not making the amount he wants to, he is happy because he is his own boss.

"When me do this, I am independent, I don't have to work for anyone. My independence matters to be. I am the only vendor at this section, so business should be popping, but it is not," he said.