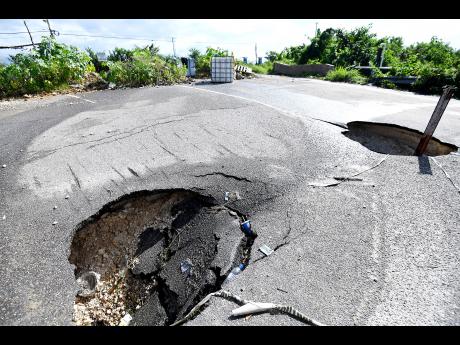 This bridge by Dyke Road and Passage Fort Drive Portmore, St Catherine, collapsed last year and was blocked off by National Works Agency (NWA), is now overgrown with vegetation (in the background).

Vendors in the Portmore Fishing Village located along Dyke Road say that they are experiencing low sales because potential clients are having difficulty getting to them.

Marva Lynch, one of the vendors, said that the road leading from Passagefort on to Dyke Road has been blocked for the past five months, and no one has come to fix it.

"Calls have been made to the municipality and the NWA (National Works Agency), and nobody nuh come and do nothing," she said.

She said that people who live in the Passagefort area and those living close to the fishing village who would like to make a purchase had go somewhere else because they have to drive too far to get access to the village.

Passagefort Drive was closed to the motoring public last November when a section of the road collapsed.

It was reported then that the metal culverts had become defective due to significant corrosion and had been further damaged because of heavy rains.

Claudia Maragh, another fish vendor, is in agreement with Lynch. She told THE WEEKEND STAR that their sales have decreased since the road collapsed.

"Some people are saying that driving through another area is rough and some a dem vehicles get damaged, so dem bitter fi drive through there," she said.

"So instead of coming here, people start go a the next fishing village, and this impact us badly," she lamented.

Lynch said that she is pleading with the authorities to fix the road because their main source of income is being impacted by patrons not being able to access it.

Efforts to get a comment on the matter from NWA's Communication and Customer Services Manager Stephen Shaw were futile.