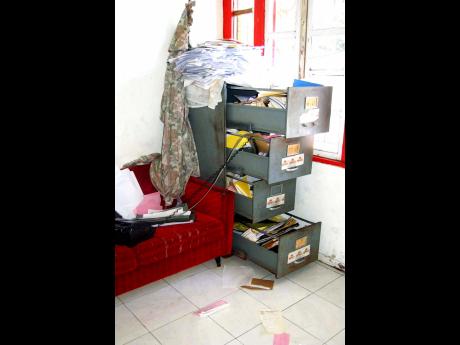 One day before the Major Organised Crime and Anti-Corruption Agency (MOCA) released information about an investigation into the works of motor vehicle importer Prisoners for Christ (PFC), customers who paid for vehicles and didn't receive them decided to trash the entity.

One employee told THE STAR that customers came to the facility on Monday to receive their cars.

"They were asking for the CEO and she wasn't there. There was a security officer talking to the customers and he wasn't giving them the information they needed. He was delaying and saying that if they didn't get their vehicle today, they could get a refund. They got upset and started to act out," he said.

THE STAR understands that employees, disgruntled with lack of payment, also took out their frustrations on the company's office.

A video shows unidentified persons walking around the office, stepping over numerous sheets of paper and filing cabinet drawers lying on the floor.

MOCA also said customers seized computers and other equipment. MOCA said these devices contain material which it believes can assist their investigations and appealed to persons to hand them over to the agency.

Former employees of the entity had reached out to THE STAR complaining of lack of payment from PFC.

Jimmy*, who worked for only a few weeks, said he was hired as a sale representative and was told that their base pay would be $60,000 with a $20,000 commission for each car sold.

But he became disgruntled after the first two weeks because of no pay.

"Every week it's the same thing. They keep on saying next week, next week," he said. "I just decided that I wasn't going back because I cannot be working and not getting paid."

John Smith* who quit afer less than two months, said he was supposed to be paid $95,000, but only got $65,000. When he enquired about getting the rest, he was told that because he quit, he would not receive the balance.

Smith said he was hired as a sales representative but because of lack of personnel, his superiors asked him to assist in another department.

"I was working in two different capacities now. I decided that I needed a new contract because I took on an additional position," he said.

Smith kept requesting a new contract, but was ignored.

"That is when I decided to back out and say I won't work under these conditions. I wrote a resignation letter and hand it to the HR who sent it to the branch manager," he said.

THE STAR has been unable to get a comment from the head of the entity.